Studio Ghibli is a renowned Japanese animation studio that has produced some of the most beloved and critically acclaimed animated films in history. The studio’s creations have earned them a loyal following both domestically and internationally, and their products are widely sought after by fans and collectors.

Studio Ghibli figurines are some of the most popular items among fans of the studio.

Studio Ghibli Figures are highly sought after by collectors all over the world. The characters and scenes created by the studio are so iconic and beloved that people are willing to pay high prices for the figures. Some of the most popular Studio Ghibli Figures include Totoro, Catbus, and No-Face.

What types of Studio Ghibli Figures are there?

This one comes in at number one on my list because the whole idea of a set of Studio Ghibli figures that you can stack one on top of the other in various combinations is, well, just ADORABLE. It kind of combines the joy of a puzzle-like balancing experience with the joy of playing with Ghibli dolls! What’s not to love?

You can even make them all balance on top of a Totoro-style umbrella. Too cute for words! 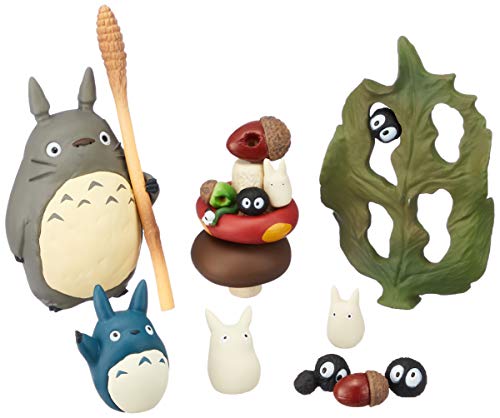 This one is a little unusual amongst the Studio Ghibli Official collection. A music box! But that fits in pretty well with the old-worldly, quirky feel of the Ghibli aesthetic. 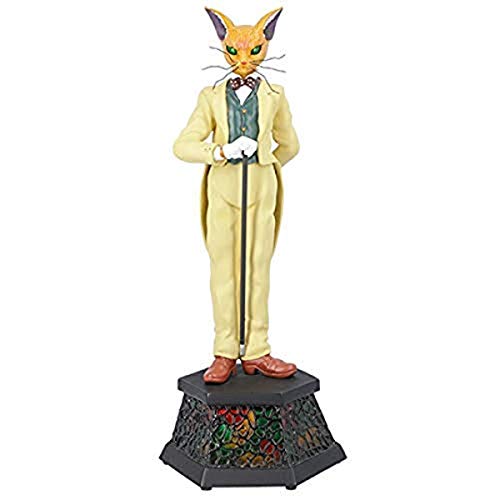 #3 Spirited Away Ghibli Offical – Three characters in one

Another nice quality Ghibli official figure. It’s nice that it gives some of the lesser-known characters that appeal to the hardcore fans. 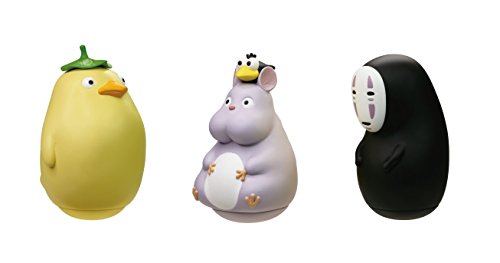 This one is really good quality. And cool that you get a whole set in various poses showing no-face at all of his enigmatic best. 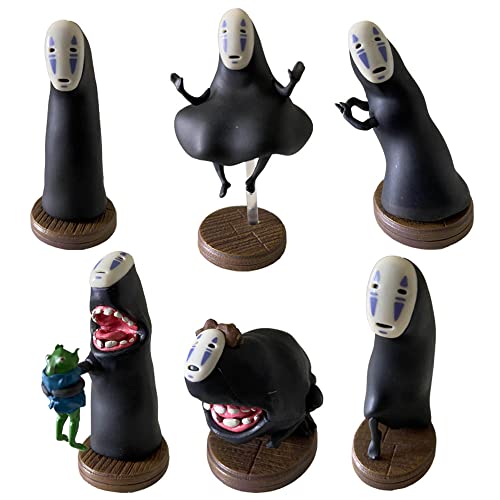 This is an exquisitely cute DIY paper kit that leaves you with your own miniature Porko Rosso diorama-style display. It’s the kinda thing that will have your guests squealing “awwww, kawaiiiii”! 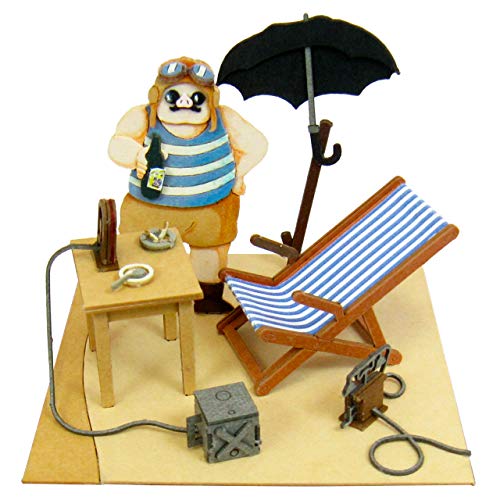 Well, if you are looking for an el-cheapo option for getting a few Ghibli figures for around the house, this is it. 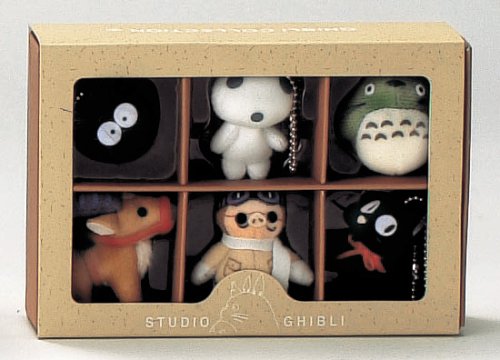 #7 Mononoke Spirits For The Garden

You could get garden gnomes. But that’s a bit, ahem, mid to late 20th century now right? But you could, instead, get yourself some sweet Ghibli characters for your yard. And what better characters would there be for that than Princess Mononoke forest spirits? Yes, there are Ghibli figures for that. 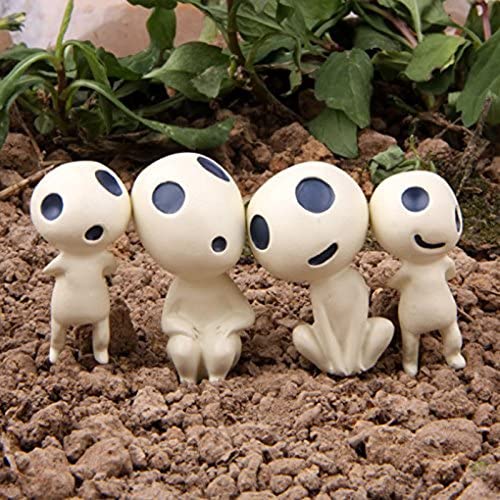 Now garden gnome-style Ghibli creatures is one thing, but if you want to take it to the next level, you’re going to want them to glow right? Right? Well, we can do that too.

These little blighters “absorb” the sun during the day and then “automatically” light up at night. So really the encapsulate the environmental spirit of Hayao Miyazaki. Well, okay, maybe that is going a little bit far, but you get the picture. 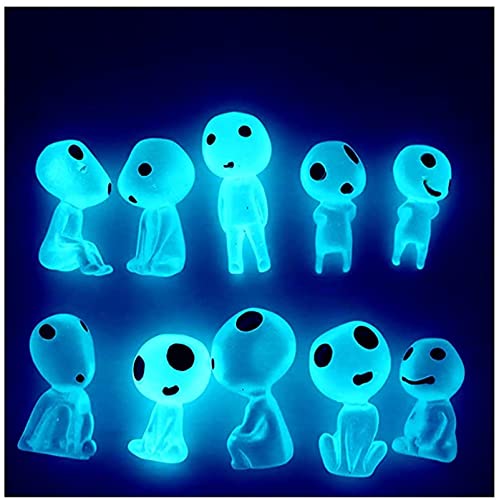 No list of Ghibli figurines would be complete with out these little black critters that feature across several Ghibli films. These ones are tiny, no bigger than the tip of your finger. Which is smaller than the ones appear in the actual films, but that actually makes them all the more cute. 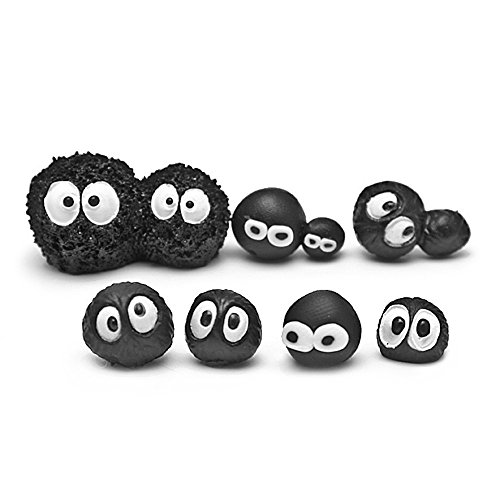 This one is for the true Totoro fan. Totoro sits on his own little swing, that can actually move if you push it. Awwwww. Forget stress balls, this is the way to mesmerize yourself!

The Totoro resin statue is an incredibly detailed and accurate replica of the characters from the movie My Neighbor Totoro. 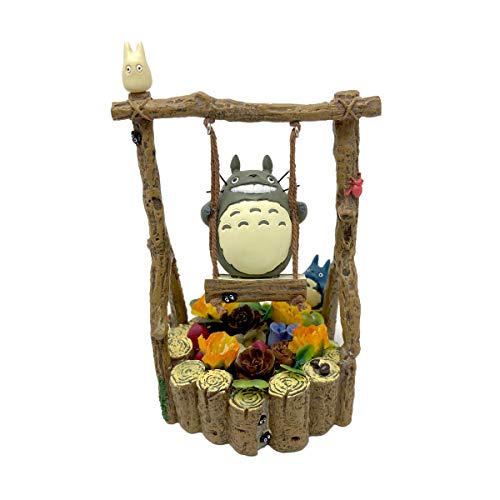 What are Studio Ghibli figures?

Studio Ghibli, known for their masterful animation and creative story telling, is also well-known for their collectible figures. These figures are made to replicate the characters and scenes from the movies, often with intricate detail and accuracy. Whether you’re a diehard fan or just curious about what all the fuss is about, these figures are a great way to get closer to your favorite movies. Notable figures:

Laputa – an imaginative and adventurous story about a boy who wants to be a knight but must first learn how to fly.

Totoro – the most famous of all Japanese animated films. Ghibli has gone on to produce other masterpieces including Spirited Away, Howl’s Moving Castle and The Secret World of Arrietty.

In conclusion, Studio Ghibli figures are a must-have for any fan of the studio’s films. They are a great way to show your love for the films and the studio, and they also make for a great addition to any collection. If you’re looking for a unique and special way to show your support for Studio Ghibli, then you should definitely consider picking up some of these figures.