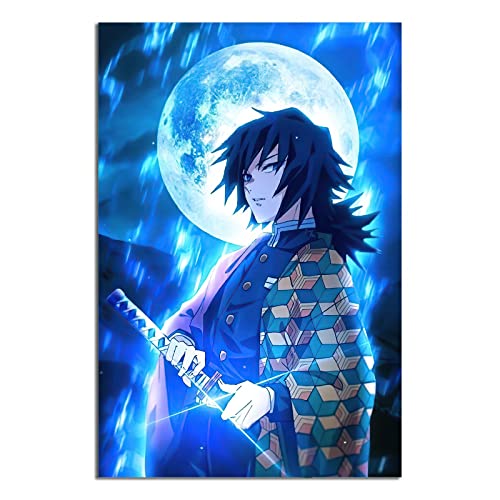 Giyuu Tomioka is an intriguing character from the series Kimetsu no Yaiba (Demon Slayer). In this post, we’ll highlight the various things about this powerful hashira pillar from his backstory to his personality and more. Here is all you need to know about the Water Hashira.

The Backstory of Giyuu Tomioka

Giyuu lived with his sister Tsutako Tomioka at a young age after their parents died from sickness. On the wedding eve of Tsutako, a demon chases the boy and nearly kills him. Luckily, Tsutako saves his younger brother from the demon but loses her life. The young boy becomes determined to tell everyone in the village about the demon, but they label him as a retard who doesn’t understand what he is saying. Bothered by his story, his society sends him away to a relative who works as a doctor.

Tomioka escapes from the doctor into the mountains, where Sakonji Urokodaki rescues him. Sakonji trains and initiates him to become a member of the Demon Slayer Corps. The Hand Demon is unhappy about Sakonji’s training and holds grudges against his students.

When he is 13 years, he meets his age mate named Sabito. The two become found of each other. During the Slaughter, Tomioka is too weak to fight after an injury from a demon. Sabito intervenes, and when Tomioka regains consciousness, he realizes his friend died in the fight.

The deaths of his sister and beloved friend, who sacrificed their lives to save him, make him doubt his abilities. Since Tsutako wore a solid red kimono and Sabito a green kimono with yellow pattern, he blends the two for his haori. On the left, it is dark red while on the right has green and yellow marks. 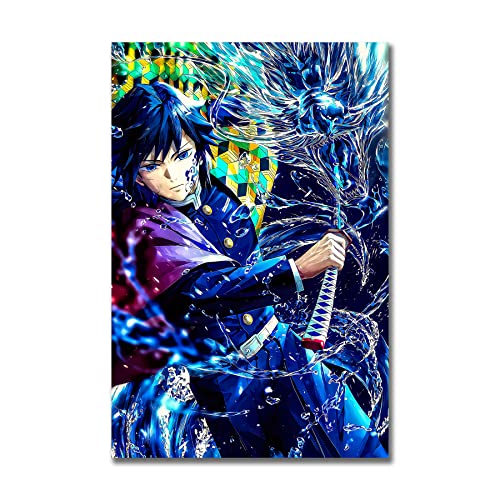 In the first episode, we first encounter Giyuu when he is about to finish Nezuko, sister to Tanjiro. We first see Tanjiro carrying her sister through the snowing mountain, searching for help in a nearby town. Unfortunately, at this time, Nezuko has already been attacked by a Demon and is in the process of becoming one.

Nezuko rapidly grows in size and starts attacking Tanjiro, who pleads with her to restrain herself from being a Demon. At this point, Giyuu comes in and tries to attack Nezuko but narrowly misses her. The force from his sword creates a windstorm that knocks off Tanjiro and her sister. At this point, Tanjiro notices the words “Destroy Demons” inscribed on the sword of the Demon Slayer.

Tanjiro’s protection of the demon is quite confusing to the swordman. However, Tanjiro explains to Tomioka that Nezuko is the only family he has and knows that she can’t hurt anyone. Nonetheless, Tomioka explains that Nezuko’s wounds have exposed the demon’s blood leading to her transformation.

The Demon Slayer stabs Nezuko’s shoulder, and Tanjiro attacks back by hurling a stone at him. The swordman deflects the stone and knocks Tanjiro unconscious with his sword. Nezuko breaks free from the kimetsu no yaiba and is ready to protect her brother. When the swordman remembers Tanjiro’s word, this demon is different and doesn’t harm humans. Instead, he spares Nezuko’s life by knocking her unconscious and waits for Tanjiro to regain consciousness. The swordman instructs Tanjiro not to let Nezuko get sunlight exposure and directs him to find Sakonji Urokodaki for assistance.

Context and Relationship with Other Characters

Tomioka has a tough exterior showing no remorse for killing demons. However, he shows some rationale before slaughtering the demons and only wants to kill those that harm humans. This trait portrays when he protects Nezuko from Shinobu’s (the Insect Pillar) attempt on her life.

The Water Hashira has an outstanding fighting ability with the sword, which makes him get a lucrative offer by Akaza. The offer is to turn him into a Demon, which is only reserved for the worthiest opponents of Akaza. However, the swordman suffers from an inferiority complex and believes he is not worthy of the Water Pillar title nor the highest rank in his Squadron. The death of his friend Sabito and sister adds to his woes of not being good enough.

The swordman has a good relationship with Tanjiro, who encourages him to bear the title of Water Hashira. He is angry about Akaza’s attempt to kill Tanjiro. The brotherly relationship between the two is visible as the swordsman easily loses his demeanor when Tanjiro is in danger.

The Water Pillar has a tight relationship with Shinobu Kocho. He is even seen smiling on a few occasions when they are together, which is so rare for him. He greatly appreciates her, especially when she claims the demons target him. The loss of Shinobu makes him visibly upset, something he never displayed when other colleagues were killed.

He begins a combative relationship with one of the Kamado brothers called Sanemi Shinagawa. The friendship blooms into a mutual understanding between the two. His compassion and kindness towards his friends are easy to spot.

Strength: Giyuu is a ferocious fighter with great stamina and skills. From the start, he can capture Nezuko and hold her with one hand despite being a demon-like figure. His ability to knock her out in a single strike shows his strength. His effectiveness in battling Akaza and chopping off the head of Xia Ngu Rui with one cut shows his outstanding physic. His achievement in succeeding in defeating Father Spider Demon and multiple demons from Twelve Kizuki is something most of his teammates have failed to accomplish. His fight against Muzan the Demon King lasts an hour, showing his stamina and endurance to fight demons for long. After Tanjiro’s transformation to a demon, the swordsman defends him for a prolonged time against Zenitsu and Kakushi till Tanjiro reverts to a human.

Speed: The Water Hashira moves with incredible agility to the extent that most opponents cannot keep up with their pace. He takes Nezuko away from Tanjiro at a superfast speed, and Tanjiro is left wondering what had happened. In a single glance, he chops off the head of Rui and ties Inosuke to a tree without the realization of the owner. The best demonstration of his speed is his ability to keep up with Akaza, one of the fastest demons. He even outshines Akaza after the awakening of his hunter’s mark.

Swordsmanship: The Water Hashira is a force to reckon with when it comes to the sword. His skills are outstanding among all his peers to the extent that Akaza acknowledges him.

Hunter’s Mark: The mark appears on his left cheek and appears as a fluid or water-like design. He experiences supernatural speed, accurate punches, strength, and endurance upon activation. Despite being badly wounded by Akaza, he can engage the Upper-Rank Demon while on the ground.

Red Nichirin Sword: The crimson red sword allows him to hinder the quick regeneration of the demons. One such occurrence is during his battle with Muzan when their swords clash with force, and both swords turn red temporarily.

Water Breathing (Mizu No Kokyu): It is a fighting technique that Giyuu learns from his master, Sakonji, to become the most skilled of his generation. As a Water Hashira, the Kimetsu no Yaiba has mastered eleven breaths:

5. The Blessed Rain after Drought (go no kata:Kanten no jiu)

“Don’t cry. Don’t despair. Now’s not the time for that. I know you’re devastated, but there’s no way to turn back time. Feel the rage, The powerful, pure rage of not being able to forgive will become your unswerving drive to take action.”

His message to Tanjiro to encourage him move forward and avenge for his family.

“The weak have no rights or choices. Their only fate is to be relentlessly crushed by the strong!”.

He tells Tanjiro these words when he sees how much he is willing to protect the sister.

This quote is his response to Shinobu who tells him that other Hashira hate him for covering Nezuko and Tanjiro from attack.

– In his eleventh form against vs Rui

– When Tanjiro begs him to spare his last surviving sister.

– Where the Water Hashira and & Urokodaki make a covenant to protect Nezuko, a decision that angers other Hashiras and an emotional moment for Tanjiro.

– When Tomioka and Tanjiro battle against Akaza in the Infinity Castle

• Introverted as he keeps away from other hashiras

• He is battling inferiority complex and gets bothered by what people say about him.

• He is protective to those who are close to him