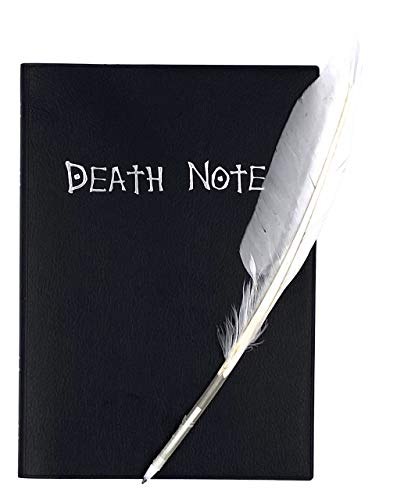 Death Note has a world view that presents equal parts despair and hope.

The light and shade motif is clearly depicted in the Yin and Yang figures of L and Light Yagami – though the creators try and muddy the waters by giving the “Dark” figure the name of “Light”.

The series constantly challenges our assumptions of ethics. If expunging the planet of every criminal makes crime disappear, isn’t that a good thing? Isn’t that the role of the “hero”? If the gods gave you the power to decide who lives and dies, who would you choose?

Death Note also challenges our ideas of Judeo-Christian faith. Where do the gods of death reside if there is no heaven and hell? Why do the gods seem so unsure of their own purpose in existing? Where does the idea of “ethics” even come from?

You get the sense that Death Note writer Ohba Tsugumi is presenting different facets of these arguments through each of the characters.

So, I thought it would be interesting to take a look at a few Death note quotes from a few of the main characters and contrast them with other quotes from philosophy, modern science, lyrics, etc.

Let’s start with the series’ most enigmatic character and sleuthing hero, L. 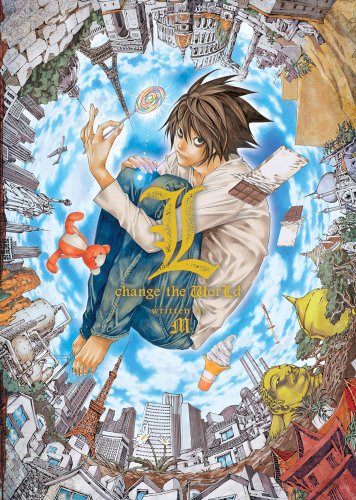 This L Death Note quote gives us an insight into the character of L having a sense of a larger mission.

Wellbeing scientist Angela Duckworth tell us that the people that have the grit to stay true to an immense task are those that exhibit four things:

Purpose is defined as whether or not the thing you are doing is useful for the world at large. Is what you are doing done in the spirit of service?

This quote from L shows us that L sees his work in fighting crime as being part of an old and ongoing struggle for the strong to protect the weak. He sees himself in a bigger picture.

This makes me think of the quote from the Buddha:

“It seems an impossible task to empty an ocean with a small ladle, but the determination to do it, even if it takes many, many lives, is the mind with which one should receive Buddha’s Enlightenment.”

You can also see something of the Japanese Buddhist idea of valuing 初心 shoshin or “beginner’s mind”.

L is constantly depicted in Death Note as having child-like characteristics. He’s seen eating sweets and cakes, he sucks his thumb, he dresses slovenly, he hunches over in quasi-fetal poses. Interestingly, the author of Death Note Ohba Tsugumi also exhibits some of these traits, such as writing on a chair with his knees tucked up and collecting teacups.

Here we see that L actually sees childishness as a virtue. It’s a source of passion for him, in the same way that children are often more excited about life than adults.

In fact, he goes as far saying it is the childish amongst us that actually make an impact in the world, which you can see in this quote:

So, though there are obvious parallels between L’s character and Yagami Light’s character, one of which being their childishness.

You get a sense that the main difference between them is that L has a faith, or hope, in the ability of humans to improve themselves.

In modern terms, he has a growth mindset. You can see this spelt out in this next L quote:

Where Yagami Light sees people as somehow pre-ordained to being good or bad, smart or stupid, talented or not, L see people as capable of improvement.

To sum this up in a word, he has the 4th criteria of what Angela Duckworth lists in her elements of “grit” – hope.

This reminds me of a quote I recently read by famous Japanese gardener Honda Seiroku:

As long as one doesn’t lose that,

a person does not age in vain. 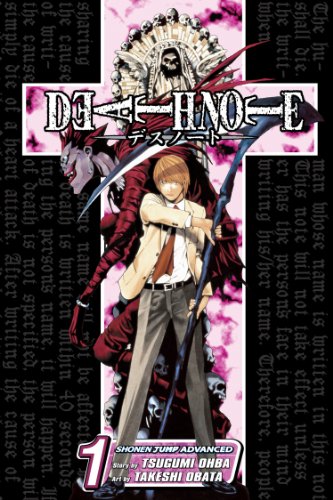 He sees the world as essentially in a state of devolution. He sees himself as the only one capable of “saving” it, ironically through the act of mass killing.

As they say, “the road to hell is paved with good intentions”.

This quote from Near actually presents a complex philosophical counter argument to the question that is often posed by monotheists to non-monotheists when talking about morality. The question goes something along the lines of “how can you have morality without an all-seeing God? How can you know whether anything is good or bad”?

This immediately brings to mind the well known Shakespeare quote:

“There is nothing either good or bad, but thinking makes it so”.

This quote suggests that morality is not something delivered from on high via stone tablets, but something that is constructed by humans, tweaked, maintained, guarded and fought for.

Popular journalist/philosopher Christopher Hitchens was also frequently presented with the question in his many debates about religion, in his own words:

“Since you don’t believe in our god, what stops you from stealing and lying and raping and killing to your heart’s content?”

And he would answer:

This quote from Near throws an interesting hypothetical twist into the argument by posing the question “even if there was a sentient, interventionist God, would it relieve us of our own responsibility to make our own decisions about what is right and wrong in the world”?

The answer for the character of Near in Death Note is no. If you believe in the ideas of rationality, questioning and self-responsibility the onus for making and upholding morality is still with you.

At another point, he shows his extreme dedication to rational thinking when he contrasts the way that Kira takes life from, an absolute, non-nuanced perspective with the way a more everyday criminal operates:

This sounds to me like a concise expression of the idea of “ethical egoism”, which holds that any decision which is made in line with your own self-interest is by its nature ethical.

But I get the sense that Near is only acknowledging that this type of thinking is consistent logically, rather than saying that he is a follower of this type of ethics.

Another one of his quotes shows that if actually abhors absolute self-interest as a moral idea:

Here we clearly see that Near does not believe that doing what is good for you is always morally justifiable. On the contrary, he calls out Kira’s supporters who he sees are doing nothing more than siding with a bully for their own safety.

In Japanese culture, there is a strong Buddhist influence of the idea of anatman, or non-self, or no-ego, and how we should be acting not in a way that strengthens our idea of ego, but in a way that helps us realise it’s essential emptiness.

You can see this in the Shunryu Suzuki quote:

What we call “I” is just a swinging door which moves when we inhale and when we exhale.

In this context, what is “self-preservation”, when there is no self there to preserve in the first place? 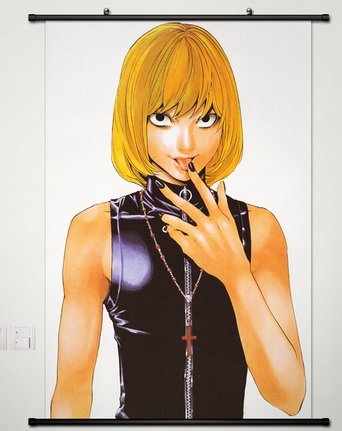 The character of Mello in Death Note is anything but “mellow”. In the contrary, his headstrong, impulsive and impassioned.

He also has a strong sense of loyalty, as you can see from the following quote.

The word 厄介 yakkai can have a range of translations in English. Options include “annoyance, disturbance, irksome”, but in another meaning “obligation, to take care of”.

So you could variously translate this phrase as

The motivation that comes from vengeance is a distraction.

The motivation that comes from vengeance is an obligation.

The motivation that comes from vengeance is a curse.

I chose to use a word that somewhat encapsulates all these meanings and has a sense of “something difficult that you most none the less deal with” and used the word “burden”.

Mello doesn’t seem to be saying here that being motivated by vengeance is good or bad. Rather, he seems to see it as a force of nature. It just is. And you have to deal with it.

This strikes me as almost feudally Japanese. That, in contrast to revenge as a personal vendetta for your own pride or gratification, it is possible to seek to take vengeance is a form of familial, or even civic, duty. 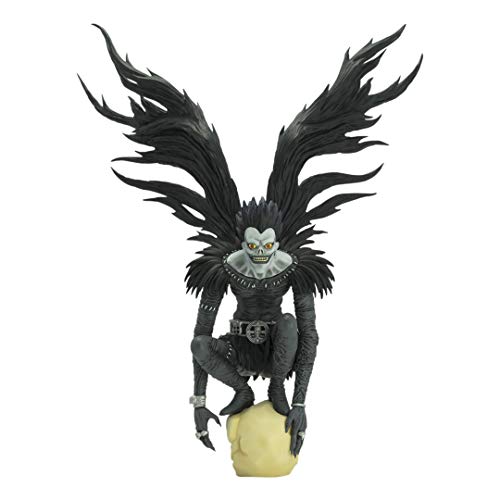 Ryuk plays the dual roles of “comic releaf” and “Greek chorus” in Death Note. His pithy comments are at once child-like and oafish, but also removed, big picture and wise.

Ryuk is a straight talker. But he, perhaps, reveales a lot about the world view of Death Note’s creators.

For people raised in Judeo-Christian societies, the idea that there would be an afterlife without a heaven or hell, is quite hard to comprehend. We are so indoctrinated with this dualistic hereafter world view.

I am reminded here of the lyrics from John Lennon’s immortal ode to atheist love, Imagine:

No hell below us

Above us, only sky”

The second part of Ryuk’s quote, that “everyone goes to the same place” doesn’t sit well with atheist thinking. Not unless this is a reference to where we physically go, a la the Tom Waits couplet:

Your face or your name

The wind through your bones

as all that remains

We’re all going to be just dirt in the ground”

The last part of Ryuk’s quote, that “death plays no favorites” is a common enough idea.

But it has been argued by palliative carer and philosopher Stephen Jenkinson that death is not as equal as we like to think. He points out that the deaths that different people experience vary greatly. Some die in anguish, others with acceptance, some die in pain, some in calm, some in the hands of well-paid professionals, others in the alleyway.

Ryuk goes on to paint a picture of the Gods as being, well, all but the same as people, but living in another dimension:

Ryuk himself certainly doesn’t seem to be immune from this sense of not knowing what has been put on, or above, this planet for. He seems to be searching for a meaning for life (or is that death?) any more than the next, um, god.

This quote makes me wonder what the Death Note writer Ohba was trying to express here. Was he trying to say, “don’t count beings from the astral plane to come and save you, there is noone else that has any more idea than you do.”

This world view makes all the more sense in a society like Japan where the mainstream opinion is that we live in a polytheistic world, where god-like beings of various levels of sentience inhabit every physical thing.

Ryuk, or Ohba, seems to be saying “go ahead and pray to the Gods if you like, but don’t expect any answers to questions that you don’t already know”.

Ryuk further hammers this home when he says:

Who would have thought the gods would experience existential ennui?

What is the upshot of this belittling of godliness?

I would suggest that it is we should live using our own resources, with our own agency, and take responsibility for our own lives.

I think here of Joseph Campbell’s idea of the Heroe’s Journey. We should have the hero’s mindset, not the victim’s. You better make the most of what you’ve got right now, because no angels, light or dark, are here to give you a push.

All it took was a Death God to tell us.