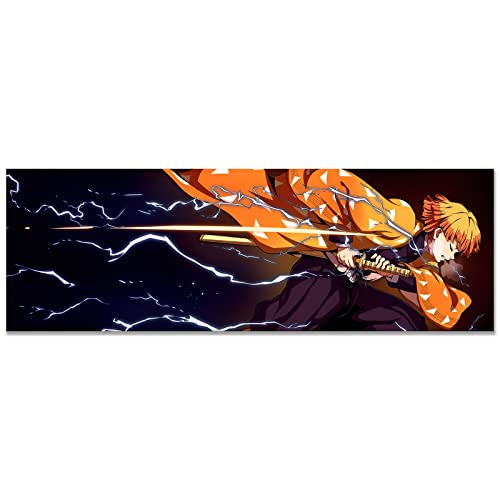 Zenitsu Agatsuma is one of the main supporting characters of Demon Slayer: Kimetsu no Yaiba. He gets about as central a role in the saga as Inosuke Hashibira, travelling companion of Tanjiro and Nezuko Kamado. He is a powerful (some of the time!) Demon Slayer in the Demon Slayer Corps. 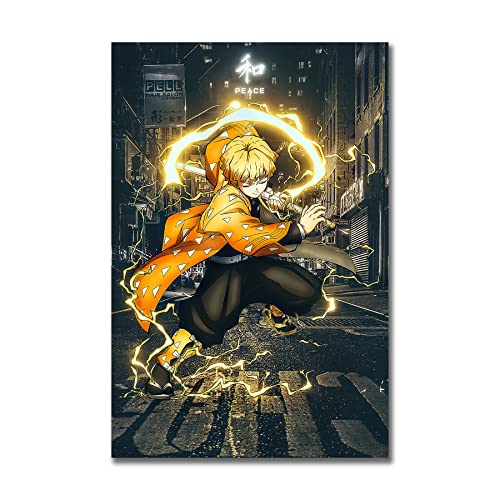 Zenitsu was not raised by his parents and there is not much information about them. Zenitsu only had Jigoro Kuwajima as his grandfather figure to guide him.

We know that Zenitsu once fell in love with a girl, and decided to give her money to appeal to her better graces. But the girl ended up running away with another guy, leaving Zenitsu drowning in debt. The character of Jigoro paid off the debt for Zenitsu and decided to train him as a swordsman.

Zenitsu begins to refer to Jigoro as ‘Gramps’ and trains alongside Kaigaku. At first, Zenitsu’s hair isn’t blonde, as it becomes later.

How did Zenitsu’s hair become blonde?

An episode is recounted in Demon Slayer as to why he has the color hair that he does. Zenitsu feels like he is being trained to death by Jigoro. He panics and climbs a tree. Lightning hits the tree and Zenitsu’s hair turns blonde! 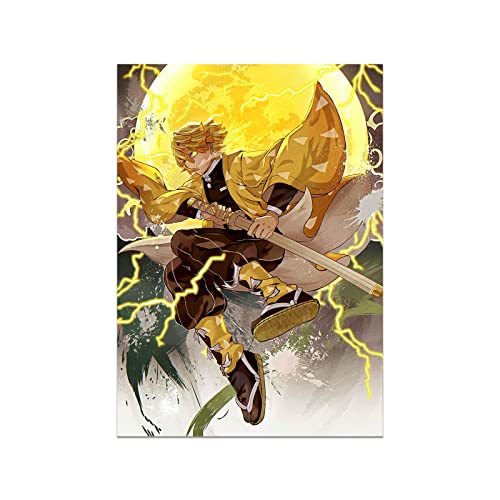 Zenitsu made his first debut during the “Final Selection” of the Demon Slayers at Mt. Fujikasane. This correlates to:

Zenitsu was one of the four people who passed.

Each successful Demon Slayer received a Kasugai Crow, except Zenitsu who got a sparrow.

Zenitsu’s relationship with the other Demon Slayer characters 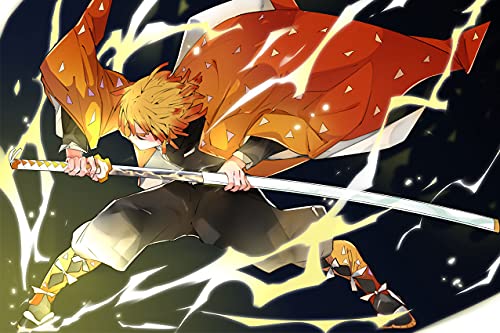 Tanjiro first met Zenitsu when Zenitsu was with a girl. Zenitsu thought that the girl liked her. In actuality, the girl was simply asking if Zenitsu was “okay”. This pretty much gives a good precursor to Zenitsu’s character, at least as it pertains to the opposite sex!

Zenitsu relies on Tanjiro to protect him whenever they face demons. This is largely due to Zenitsu’s low self-esteem. Zenitsu thinks of himself as a weakling.

Zenitsu admires Tanjiro’s leadership. But he always gets jealous of Tanjiro whenever they are with girls. This could also be said to be true of Tanjiro and Nezuko’s sibling relationship, after Zenitsu falls in love with Nezuko the moment she is revealed from her demon-box.

Zenitsu also sometimes sees Tanjiro’s bravery as suicidal, something that would get them both killed.

Even so, Zenitsu and Tanjiro’s friendship is the real deal – alongside that of the friendship with Inosuke.

Despite having an intense fear of Demons, Zenitsu develops a crush on Nezuko. He never fails to mention his admiration for her whenever he sees her. Zenitsu later calms down around Nezuko and becomes less “aggressive”.

Zenitsu protects Nezuko many times when she is in danger. This is evident during Zenitsu’s first meeting with Inosuke Hashibira. Zenitsu protects the box Tanjiro is always carrying, the box carrying Nezuko, from Inosuke.

You can also see this in the battle against Enmu in the Mugen train from “Demon Slayer the movie: Mugen Train”.

Zenitsu and Nezuko go on to marry and start a family that would produce a long line of descendants.

Zenitsu and Inosuke usually don’t get along, in spite of being on the same team. They have hugely contrasting personalities. Inosuke sees Zenitsu as annoying, loud, weak, and a crybaby. Zenitsu sees Inosuke as a violent moron who’s only interested in fighting.

But when fighting demons, they cooperate well.

There is a scene where Inosuke admires Zenitsu while asleep, and praises his abilities. Inosuke tells Zenitsu that he should sleep forever after seeing how cool he fights. A case in point is their huge fight against Daki.

Jigoro saved Zenitsu from his debt-ridden state and decided to train him to become a swordsman.

Jigoro was strict with inexperienced Zenitsu.

During Zenitsu’s training in Hashira Training Arc, Jigoro is shocked and enraged by the news that Kaigaku has turned himself into a demo. Jigoro commits seppuku. This causes Zenitsu to immediately focus on his training. It becomes his goal to lay his mentor’s regret to rest by becoming strong and defeating Kaigaku. He is out to redeem Jigoro’s name.

Zenitsu holds a great deal of respect towards Kaigaku. But, Kaigaku always belittles Zenitsu and calls him “dirt”, due to his lack of strength. Zenitsu admits that Kaigaku is special, important to him like his “Gramps”.

During Zenitsu and Kaigaku’s encounter at Infinite Castle Arc. Zenitsu tells him he has wished to use his technique on Kaigaku in battle one day. The battle ends up with Zenitsu defeating Kaigaku. 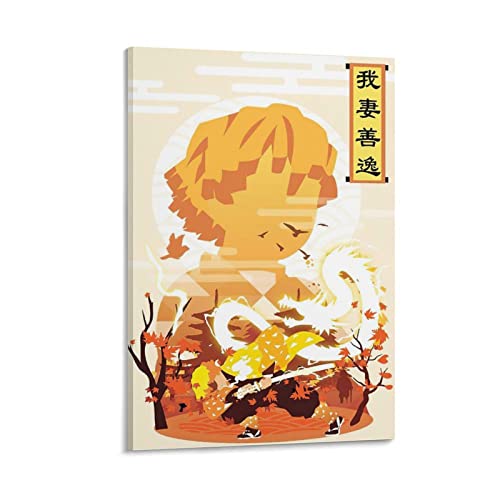 Zenitsu possesses a heightened sense of hearing. This allows him to detect danger from even the faintest of sounds. He displays the ability to decipher layers upon layers of sound using his hearing.

Zenitsu also can replicate any tune he hears on Shamisen and Koto. He can do this only after listening to it for the first time despite having no musical background.

Zenitsu’s exceptional hearing also enables him to fight in his sleep. This is an impressive feat as he relies only on sound to discern his surroundings. In this way he can keep up with the attacks of demons.

He also uses Thunder Breathing. He does this in spite of only having mastered the first form Thunderclap and Flash. Although he only has this first form in his arsenal, he develops it to be stronger. He takes the technique from six (六連 Rokuren) to eight folds (八連 Hachiren), delivering much stronger, faster attack damage.

Zenitsu also created Godspeed which derives from the first form of thunder breathing. The user performs Thunderclap and Flash while augmenting the speed of the technique. While sleeping, Zenitsu remarks that he mustn’t perform this technique more than two times. Otherwise, his legs give up due to exhaustion. But during the battle against Muzan Kibutsuji, Zenitsu improves this technique.

He becomes able to use it more than twice while still maintaining the power and speed of the technique.

He also creates the Seventh Form: Flaming Thunder God and uses it to defeat Raigaku. The user dashes forward at blinding speeds and unleashes a singular forward slash.  This is accompanied by a yellow Japanese dragon shaped like a lightning bolt.

Aside from his first appearance in the Final Selection, Zenitsu is seen by Tanjiro during episode 11 of the first season. Zenitsu is asking a girl to marry him and if she likes him. Later on, this is revealed to be a misunderstanding on the part of Zenitsu. The girl says that she saw Zenitsu on the side of the road looking ill and tried to ask if he was okay.

In the same episode, Zentisu and Tanjiro both have a mission in Tsuzumi Mansion. They fight three demons and meet Hashibira Inosuke who fights one of the three demons.

Another notable scene is his fight against Daki where he uses Godspeed for the first time. (episode 10 season 2). 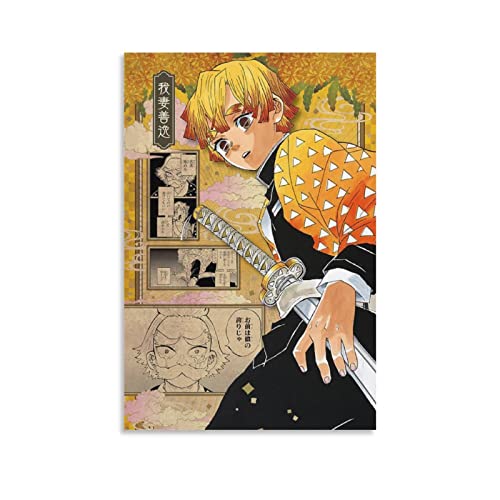 Zenitsu is first depicted as a coward.

He often claims that he doesn’t have long to live due to the dangerous nature of being a Demon Slayer. He also has a low self-esteem, despite his strength.

Zenitsu couldn’t believe himself when he first slew a demon and tricks himself into believing that the demon was actually the character of Shoichi.

Zenitsu is in a constant state of fear and always cries. He always tries to run away at the sight of danger, claiming he wants to live a modest, normal life. Zenitsu screams and shouts a lot, sometimes annoying the people around him.

He is also shown to be pessimistic at times. During the Hashira Training Arc, he lashes out at Tanjiro and Inosuke for training too hard.

Yet despite these weaknesses, Zenitsu wants to live up to the expectations of others. He tries his hardest when he needs to. He holds great respect and admiration for his comrades and his deceased teacher. His inner focus and drive in avenging his teacher help to wash away his cowardice, and second thoughts when he is in a pinch.

Zenitsu also hates himself for how cowardly and incompetent he is.

Zenitsu is also shown to be something of a womaniser, stemming from a desire to not die single. He tends to hit on many of girls of Demon Slayer who he thinks are cute and asks them to marry him, much to their annoyance.

This womanising nature is shown to override his docile personality. When he believes his comrades are with cute girls, he soon snaps and goes into long hysterical rants.

Zenitsu seems to have a strong crush on Nezuko. Expressing his affection for her and always rushes to protect her, as if by instinct.

He is also shown to become aggressive, lashing out at women in frustration. That said,  Zenitsu also shows respect for women. He tells Daki to let go of a girl that Daki nearly tears the ear off, and apologize.

Zenitsu has more knowledge about how the city works compared to Tanjiro and Inosuke. He is the only boy in the trio to have grown up in the city.

Before the raid on the Infinity Castle, Zenitsu gives off a different, more serious vibe. As if he is focusing on something important. This occurs after receiving a letter from Chuntaro. The letter revealed his master’s death and Kaigaku’s role in it. During his fight against Kaigaku, Zenitsu is stern and becomes enraged. His sudden change surprised his ex-senior. Zenitsu shows a more mature persona compared to his usual cowardice. 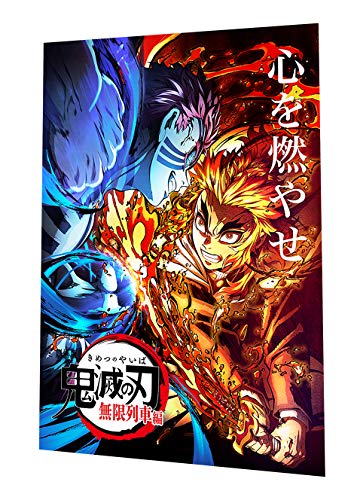 Zenitsu is a young boy of average height with fair skin. Downward-sloped, scared-looking eyes fade from soft brown to gold.

He has short, yellow hair of varying lengths. His hair cuts off at the ends where it fades to a darker orange color.

Before he became a Demon Slayer, Zenitsu’s hair was black. But it turned blonde when lightning struck the tree he was climbing during his training.

For some time following the battle at Mount Natagumo, his limbs shrunk due to the Spider Demon (Son)’s poison. But they were able to return to normal afterward thanks to the medicine given to him by Shinobu Kocho.

He wears a paler brown version of the standard Demon Slayer uniform. This consists of a dark brown Gakuran jacket, a white belt around his waist, and Hakama pants. He also wears his signature white-triangle patterned, yellow and orange gradient Haori. Zenitsu further sports a pair of Kyahan tied at the front in 3 white bows, with the same pattern as his haori. On his feet are pale brown Tabi socks, and white-laced Zōri. 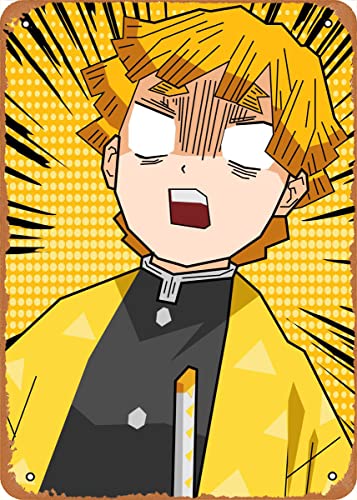 It isn’t surprising that yellow symbolizes happiness, warmth, and sunshine in most cultures. These are characteristics of the yellow sun and its effects.

Despite this, Zenitsu himself lacks self-confidence in what he can do. He is a strong, talented Demon Slayer able to create his own techniques and eventually surpass his senior.

Zenitsu is a great example of a person with a lack of self-esteem.

He teaches us that we are what we think we are.

Think of yourself as a no-good person and you will be one – despite your having a great potential to grow and be the best of what you can be today.

I, for one, am guilty of not having confidence in myself and I know how messed up this is. But if we believe in ourselves, we could be better than what we think we are, we just need a leap of faith. And maybe a little bit of Demon Slayer magic!