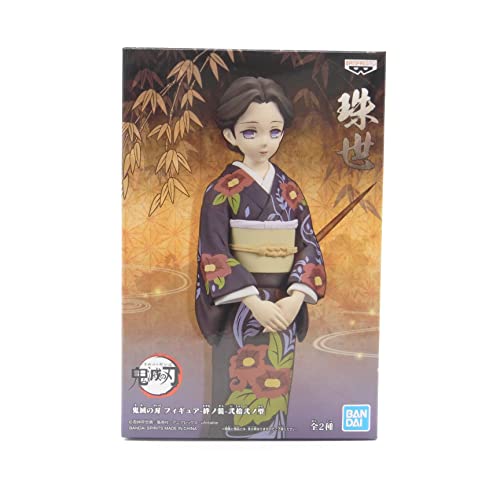 Tamayo (珠世 Tamayo) is a major supporting character of Demon Slayer: Kimetsu no Yaiba. She is an intriguing mix of demon, skilled doctor, and close ally of Tanjiro Kamado and sister. Perhaps most crucially within the Demon Slayer story, Tamayo and Yushiro develop a drug that would aid to defeat Kibutsuji Muzan. They join forces with the Demon Slayer Corps during the last two arcs of the series.

What is the meaning of their name in Japanese?

Tamayo consists of two kanji or Japanese symbols. The first one means gem or jewel (珠) and the second kanji means generation, era or period (世). Together it gives the meaning of “Jewel of a generation”

Tamayo first appeared during the Asakusa Arc of Demon Slayer. In this arc, Kamado Tanjiro is restraining a recently transformed, raging demon to avoid killing humans. During the commotion, a group of three policemen tries to settle the situation. Tamayo then uses “Enchanting Blood: Aroma of Visual Fantasy” to confuse their senses.

Next, alongside her partner Yushiro, she approaches the Demon Slayer. She comments on the fact that Tanjiro has been still addressing the Demon as a “human”, not a “demon”, and trying to save him. Tamayo explains that she’s a Demon, and also a doctor. She also says that she hates Muzan as much as Tanjiro does. Indeed she wants to see Muzan utterly destroyed. Eventually, Tamayo lends a hand to the Demon Slayer in the situation and lets Tanjiro escape the crowd.

Tamayo Relationship with other characters

It’s not revealed how these two met, but it seems likely that they know each other as a result of Tamayo having treated Yushiro during an unknown illness.

Yushiro had been on the verge of death, Tamayo asked him if he wanted her to save his life by turning him into a Demon.

Yushiro decides to become a demon and Tamayo takes him as her personal assistant. Yushiro also developed strong romantic feelings towards Tamayo, becoming very possessive of her. He becomes angry when someone else is dwelling too close to her. Even Nezuko hugging Tamayo makes Yushiro mad and jealous!

Tamayo met Tanjiro when he was restraining a newly-turned demon that Muzan had created. Tanjiro’s actions and words, showing compassion for the demon, moves Tamayo. She then decides to help Tanjiro in his mission to kill Kibutsuji Muzan. This trust is further solidified when Tanjiro assists Tamayo in her goal to create a drug -a drug that allows demons to become human again.

Nezuko seems to be at ease around Tamayo, acting more childishly than she usually would. Nezuko sees Tamayo as a part of her family,  even as someone like a mother. This creates a strong bond between Tamayo and Nezuko. Nezuko views her as more or less “normal”, or “human”, even though Tamayo is a Demon with her own fair share of past sins.

In their first encounter, Muzan turns Tamayo into a Demon, in order to cure her disease. Sadly, Tamayo brings about the death of her husband and kids shortly after becoming a demon.

Much like Nezuko, Muzan views Tamayo as a nuisance. He doesn’t like that he can’t control Tamayo, and wants to kill her. He mocks Tamayo for killing her family and going on a rampage, killing other humans in the process.

Previously, hundreds of years ago, Tamayo had attempted to kill Muzan. But she realized that she stood no chance at all of winning. Her resolve and determination give way to a docile, servant-like demeanor.

But when she sees Yoriichi’s fight against Muzan, Tamayo’s resolve is reignited. She once again focuses her efforts on defeating her arch nemesis, Muzan. She restarts in earnest her research into creating drugs that weaken or kill the mighty demon.

Eventually, Tamayo would get her revenge, in Muzan’s death at the hands of the Demon Slayer Corps. 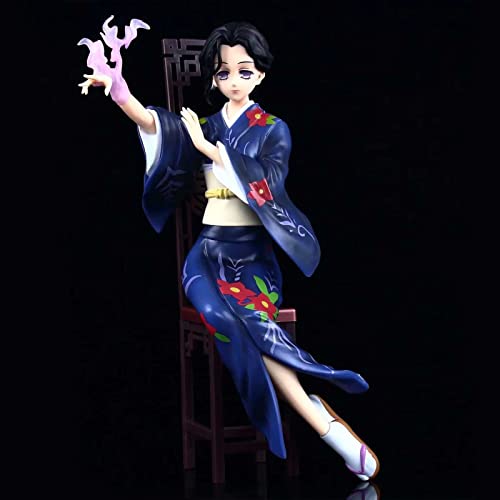 Tamayo displays impressive skills in the fields of medicine and pharmaceuticals. She possesses the skill to alter her own body so that she can survive on only a small amount of human blood. She is also able to convert Yushiro into a Demon without the aid of Muzan’s blood.

Tamayo is able to assist Kocho Shinobu in saturating her body with Wisteria poison. This action was later useful against the Upper-Rank Two, Doma who eats Shinobu’s body.

This is a medicine that Tamayo concocts that is capable of stifling the effects of Demon’s Blood Demon Art. This is used to dramatic effect to cure Zenitsu after his epic battle with Kaigaku.

Tamayo, Yushiro, and Shinobu are able to create a powerful, four-stage drug that weakens Muzan Kibutsuji. Once administered to him, he becomes much more vulnerable to physical attacks.

Tamayo can cast various spells that have a range of effects on her targets.

One of the intriguing and macabre ways that Tamayo can conjure her magic is by drawing her own blood. This allows her to manipulate the scent of her own blood to inflict all kinds of damage on her adversaries.

The Aroma of Visual Fantasy (視覺夢幻の香 Shikaku Mugen no Kō)

This technique causes the target to hallucinate. Their vision is hindered by a series of beautiful, but potentially deadly, flower patterns.

Magical Aroma of Daylight is a “truth serum”. It hinders the brain’s mechanisms to the point where those that are under its effects will confess their deepest secrets. This powerful aroma is strong enough to be harmful to humans. 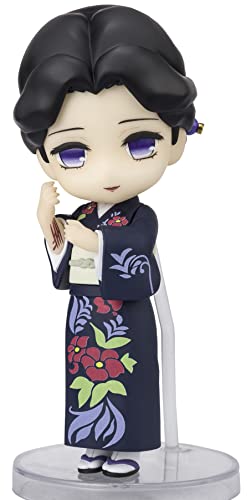 (To Tanjiro Kamado) “You still use… the term “person”… to refer to even a transformed demon. And you’re trying to save him. Allow me, then, to lend you a hand.”

Muzan’s attack on the Ubuyashiki residence is one of the most exciting scenes that features Tamayo.

Kagaya, his wife, and two of his daughters sacrifice their lives to blow up the evil Muzan. As the demon king tries to recover from the explosion, Tamayo releases her “Flesh Seed” attack.

The seeds send large, thorn-like spikes out to pierce through his body.

Muzan realizes that he can’t move, because of a Blood Demon Art, and begins to try and absorb the spikes. But Tamayo rushes towards him and pushes her fist through his stomach. Bewildered, Muzan asks her why she’s here and considers what her goal might be in doing this.

She explains that her fist contains a drug that can turn a Demon back into a human.  An expression of shock forms on Muzan’s face as he voices his denial of that possibility. But Tamayo says that it’s definitely real, although she hasn’t achieved the drug’s creation alone.

Tamayo is a gentle, wise, and intelligent individual. She devotes her life to researching the science behind Demons and Demon Transformation. She is one of the most knowledgeable people on the subject in the series.

Despite being a demon, she showed a great deal of kindness towards humans. She makes it a part of her mission to assist injured or sick individuals with her medical knowledge.

Tamayo has a strong preference for non-violence. Instead of killing humans, she chose to buy blood from consenting donors to survive. She is adamant in teaching Yushiro, who has a habit of hitting others, to refrain from violence. She is one of the few Demons who, in her later Demon life, was able to regain and keep her human emotions to some extent.

During the encounter with Muzan, Tamayo seems to be a different person. Upon confronting the Demon king, she displays a more cruel and vicious persona. She boasts to Muzan that she has created a human-transforming drug and injects it into him.

Tamayo again shows her cruel side when she reveals the real effects of her drugs even after Muzan has eaten her. Muzan hints that this vicious personality was Tamayo’s original personality as a Demon.

Tamayo is a beautiful woman with long, dark brown hair, parted in the center. It is also braided back into a large, low bun and uses a floral tama-kanzashi hairpin to hold it in place.

Tamayo wears a dark purple medium-length hōmongi kimono. The kimono is decorated with wavy pale purple tree branches and red flowers. She uses a cream-colored taiko musubi obi to secure the Kimono around her waist.

On her feet she wears plain white socks and violet zōri sandals.

Hōmongi (訪問着) “Homon” mean’s “visit”. So “homongi” literally means “something you wear for visiting. They are formal kimonos similar to a tsukesage. The seams usually have matching patterns on them and they are constructed out of silken materials.

What does Tamayo’s clothing tell us about who she is?

Tamayo, despite being a demon, is a kind and gentle character in the series.

But she also has a vicious side to go along with her positive personality. This is reflected by her attire in general.

Her visage suggests that she is a well-mannered, beautiful, and pure woman. This is true to her nature, which we see unfold throughout the series. Tamayo has something of the demure nature of a Geisha with her gentle sophisticated gestures.

In conclusion, Tamayo is a strong and determined character who never gives up, even in the face of insurmountable odds. Her compassion and courage make her a true hero.

Tamayo is a kind and caring person, always putting others before herself. She may not be the strongest fighter, but she has a heart of gold. Tamayo is a great friend and comrade in arms, always lending a helping hand when needed.