Today Japanese Christmas is all about deep-fried drumsticks, and eating strawberry shortcake on your way to the love hotel.

There is a pretty weird piece of footage of early Kentucky Fried Chicken Japan Chairman Loy Western screaming “Kentucky Fried Chicken banzai!” at a group of somewhat nonplussed, but clapping and smiling in a North Korean Communist party kind of way, Japanese company men. It seems to symbolize a Western commercialization approach to Japan in the modern age.He could have been screaming “Christmas Banzai, profits banzai!”

Kentucky Employees place a display in Japan in the 1980s

Of course, English speakers like to poke fun at what they see as being the wacky, topsy-turvy Japanese Christmas customs that aren’t exactly the same as theirs, as if America didn’t have different festive season customs from Germany, from England, from Greece, from the antipodes etc.

The first Christmas to be held in Japan was by a Jesuit missionary, Cosme de Trace in 1552 in Yamaguchi, in the South West corner of Japan’s main island.

The Spaniard from Valencia had come to Japan at a tricky time. It was the sengoku jidai, Japan’s drawn out war period of everyone fighting everyone. Alas, John Lennon hadn’t been born yet, so Cosme couldn’t sing to the Japanese “Merry Christmas, war is over if you want it”.

Cosme had come to Japan to preach the good news along with God’s man in Asia, legendary Christian proselytizer Francis Xavier.

Whether Cosme and Francis kept a competitive tally for the collection of human soles is uncertain, but it is reported that Cosme claimed to have baptized around 2000 people in the city of Yamaguchi alone.

I like to think of the exercise as the 1500s equivalent of people playing Pokemon Go, scouring the landscape for just one more character to collect.

So holding a little xmas knees-up in 1552 probably seemed justified.

Perhaps he started the ceremonies with “In your face Xavier”.

Around 1560, 100 newly minted Japanese Christians gathered in Kyoto to celebrate 降誕祭 (koutansai), which is a word meaning “festival of the birth of a great saint”. So, if nothing else, it’s worth noting that there is a Japanese word for Christmas, though it is basically unused these days.

Intriguingly, from 1568, there exists a note by Jesuit Luis Frois that reads “Nobunaga Oda and Hisahide Matsunaga held a ceasefire for Christmas.” 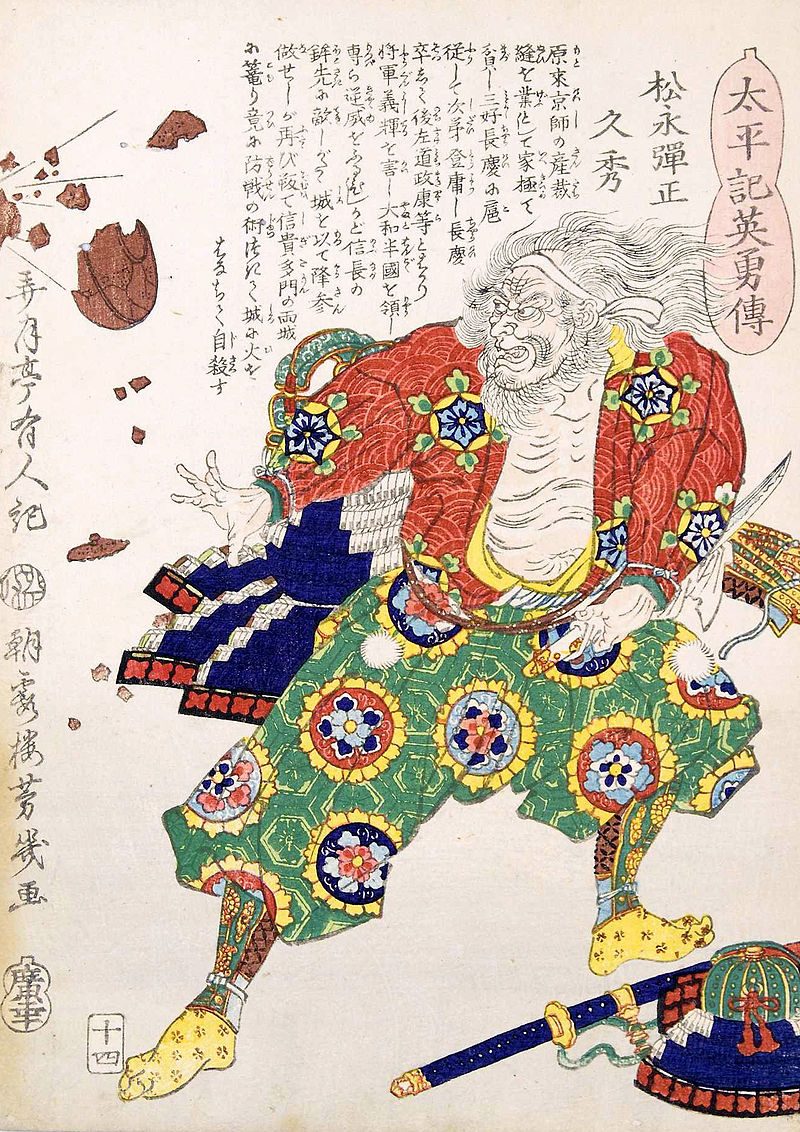 Luis may have been biased, and it’s questionable how nuanced a view the Christian missionary would have had of the socio-geo-political forces at work in his adopted nation. But many historians take this as an indication that there were Christmas celebrations being held all around the place in Japan at the time.

The cult of Santa had landed.

Whether they ate turkey, pork or sushi rolls dipped in cranberry sauce is not recorded.

Unfortunately, Cosme and his Christian crew were unable to effectively fight for their right to party (it isn’t recorded, either, whether Cosme was a Beastie Boys fan or not) with Shogun Ieyasu Tokugawa banning Christianity, on pain of death, in 1612.

So, talk about your Grinch that stole Christmas.

Tokugawa didn’t manage to wholly ba-humbug out the entire Christian faith in Japan though.  A group of Christians in Amakusa and other places, quite literally “kept the faith” (with little to no help from Jon Bon Jovi) across several centuries. They are known in Japan as the “kakure kurisuchan”, the “Christians-in-Hiding”.

Not surprisingly, it is not recorded whether Christmas was celebrated during this time because, at the time, you could have a public Merry Christmas, but you could only do it once.

So what was on the dinner menu here, too, will remain a mystery.

This period also became the time where Japan took it’s bat and ball and decided not to  play with the rest of the world. It cut itself off, allowing no foreigners in, and no Japanese out. It went from sengoku warring to sakoku racisting and created a fortress nation. One wonders why there was no Trumpian wall constructed to help in the cause.

They did allow a couple of small trading outposts at the more far-flung extremes, such as in Dejima in Nagasaki.

It is reported that the foreign barbarians, Dutchmen to be precise, celebrated “winter solstice festivals” or “New Years Festivals”. It’s a pretty safe bet that these were probably covert names for “Christmas”.

Amusingly, in addition to the word the オランダ正月 oranda shogatsu meaning “Dutch New Year”, the Japanese people also referred to these shindigs as 紅毛正月mouge shogatsu meaning “Red Haired New Years”. Evidently, the Edo Period Japanese were not without a sense of humor.

What modern Dutch lovers of Japan think of this term, I wouldn’t like to hazard a guess.

Fast forward to the Meiji era of 1868. The period after Commodore Perry sailed into Tokyo Bay in 1853, stood next to a smoking cannon, and politely asked the Japanese to open up their country to trade with his friendly, and powerful, nation of America was one of rapid modernization. And Westernization.

You could all but hear the jingle bells faintly ringing across the pacific.

In 1873, the decree outlawing the practice of the Christian religion was lifted, and the Christians-In-Hiding of Japan breathed a sigh of relief two and a half centuries coming.

The iconic Meiji-ya foreign import goods store, which opened in 1885 in Ginza, began selling Christmas paraphernalia. Christmas started to catch on with the common people, or at least those curious about all things barbarian. The snowdome invasian had begun.

But it is believed that Christmas cheer did not really spread in earnest until the Showa era which began in 1926.

Up until WWII, there were national holidays for both the emperor’s birthday and the death of the past emperor (崩御の日 hougyo no hi) . When Emperor Taisho passed away on December 25, 1926, the date became a national holiday. This meant that Japan had, by coincidence, fluked a holiday for Christmas.

By this time, special Christmas menus were becoming a must-have at cafes and coffee shops around the trendy areas of Tokyo. Shop staff began donning various pieces of Christmas clothing, starting them down the slippery slope to that low point of collective human culture; the synthetic deer antler head-dress.

When Japan entered WWII, it became not so cool to celebrate all things Western.

Not-so-cool as in the use of English was banned. Western-style festivals were roundly discouraged.

But strangely, the spirit of Christmas lived on, in a subtle way, in war time Japan. For example, in the Japanese propaganda film 加藤隼戦闘隊 Kato’s Falcon Squadron, about a famed fleet of fighter pilots, there is a scene where the airmen sit down to a fancy dinner in a occupied hotel in Bangkok. Beside the diner is a Christmas tree replete with lights. They sit beneath Christmas wreaths. Other pictures of wartime Christmas trees exist.

It was as if the magic of Christmas had exerted some kind of power on the fighting nation, allowing them to perform a national-historical double-think (and if that’s not a Christmas movie waiting to be made, I’ll go ding-dong!).

If nothing else, this would suggest that certain Christmas traditions had become pretty well ingrained by this time.

This “Default Christmas” holiday on December 25 continued until the passing of a broader law on national days off came into effect in 1948, amidst the settling dusts of the war, and spoiled everyone’s fun.

By another strange coincidence, however, the incoming emperor was born on December 23rd, triggering another national holiday close to Christmas. Indeed, when the stars align and the calendar flaps in the right direction, the Emperor’s birthday day-off is pushed back a day, creating, you guessed it, a holiday for Christmas eve. It only happens every decade or so though. The Japanese have had work-free eves in 1990, 2001, 2007, 2012 and 2018.

By this time, Christmas in Japan was more or less established. All that remained was for Kentucky Fried Chicken to enter the nation and unilaterally declare that “KFC is Christmas クリスマスはケンタッキー” in their famous campaign slogan of 1974.