Unlike the English language, there are several variations of the word “Endurance” in Japanese. It could be physical endurance, mental fortitude, or emotional strength. Each concept of endurance uses different words in the Japanese language. Knowing which type of endurance to use when expressing a thought is crucial to avoid confusion and misunderstanding.

In this article, we will give you a brief idea of kanji and words used for endurance in the Japanese language. This will help you understand the true meaning of each character and how to use the Japanese symbols for endurance.

What is the Japanese symbol for endurance? 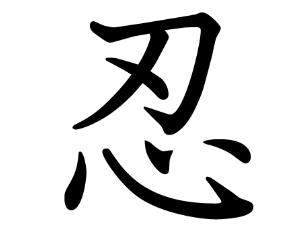 When it comes to the word “endure” or “tolerate,” the easiest kanji to remember is 忍. Why is it easy to remember? It’s because this kanji is read as /Shino/ as in /Shino.bi/, which is also another word for Ninja. And if you are a fan of the Japanese language, you are probably very much aware of the term /Shinobi/.

The kanji 忍/Shino-bi/ is composed of two characters: 1. 心 /kokoro/, which means heart, and 2. 刃  /jin/, which means blade or sword. This kanji represents the very meaning of what it means to endure; you need to have a heart as strong as steel and as sharp as a blade that can cut through any hardship you have to go through. It’s not just about withstanding pain; it’s also about overcoming hardship through perseverance.

The very concept of endurance is what the ninjas live by. To endure, you need to struggle and train every day until you become strong enough to get through the obstacles. Enduring is not just about surviving but also about growing.

Another Kanji for Endurance

Another kanji that is also often referred to as Endurance in Japanese is 耐. Its On-Yomi is /Tai/ (タイ), while its Kun-Yomi is /ta/ of /ta-eru/(た-える). Its dictionary meanings are endure and withstand. This kanji is often used as a noun and is sometimes referred to as endurance, durability, and stamina. When used as an adjective, it usually means resistance.

While it’s not as cool as the kanji 忍 (Shino-bi), it is still widely used in daily conversations. It’s even more used in words relating to endurance compared to 忍 (Shino-bi).

While in English, both (Shinobi) and (Ta-eru) seem very similar, they are very different in Japanese. (Shinobi)  focuses more on the act of enduring, the ability to bear difficulties and challenges and overcome them. (Taeru), on the other hand, focuses more on one’s capacity to endure. It emphasizes on the power to withstand adversaries more than the act of withstanding itself.

(Shino-bi) mainly answers the question of whether one can endure and survive. While (Ta-eru) primarily focuses on how much one can bear and how long one can endure.

What words are the Japanese characters for endurance used in?

Some common Japanese words that use the Japanese characters for endurance relating to their meaning in English are:

忍耐, pronounced as / Nin.tai/, is a commonly used noun in Japanese that means endurance, patience, and perseverance. It can also be used as a verb by adding する(suru).

This word bears the two kanji for endurance. As explained earlier, while both kanji are seemingly the same, they cary a nuance that makes them different. 忍耐 (nintai) is the embodiment of the true meaning of endurance: having the capacity to endure difficulties and overcome hardship.

Example Sentences For the Japanese word for 忍耐 (Nintai):

His strength gives us courage, and endurance.

Nobody is able to succeed without endurance.

Rutherford lacked the endurance for this work, which is why he left it to his younger colleagues.

Patience is a rare virtue these days.

Perseverance, it is often said, is the key to success.

The word “Ninja” might just be (arguably) the coolest word in the Japanese language, especially if you are a fan of anime and martial arts. It’s hard to deny the influence of the concept of “Samurai” and “Ninja” on a lot of men outside Japan.

The kanji for the word “Ninja” is composed of two characters: 忍 for endurance and 者 for person. Basically, being a Ninja means becoming a person who constantly endures. But of course, it takes more than just enduring to become a real ninja; you also need to have the skills.

The term Ninja is an occupation in old Japan that involves training with ninjutsu and doing covert operations for feudal lords.

Kaginawa is counted as one of the seven tools for ninja.

Nagano Prefecture has a museum of ninja.

Ninja are loved all over the world in a myriad forms, including films, anime and many more.

耐久 (Taikyu) is another common word used in everyday Japanese conversation that refers to a type of endurance similar to durability. The word Taikyu mainly focuses on the ability of a person or thing to withstand certain conditions. Its dictionary meanings are endurance and persistence.

He checked the durability of the house before buying it.

The Dakar rally is an endurance car race.

The Seychelles is protecting its coral reefs; it’s replenishing its fisheries; it’s improving its resilience to climate change.

堪忍 (Kannin) is also another word for endurance in the Japanese language. Its main difference among all types of endurance that is for the mind and the heart. Its closest translation in the English language is patience.

Its dictionary meanings are patience, tolerance, forbearance, forgive and pardon. It’s used as a noun or irregular verb (する verb).

My patience has worn out.

When there is endurance in your heart, you will be able to balance things.

Please be patient (sweat).(Wata) Nice to meet you.

I tried to be calm, but finally I lost my temper.

Is the Japanese symbol for “Endurance” the same in Chinese?

Yes, both the Japanese kanji 忍 and 耐 are used the same way in Chinese. 忍 in Chinese is read as / rěn/ while 耐 is read as / nài/. They also have the same dictionary meanings altogether.

It’s not really surprising since both kanjis are directly borrowed from the Chinese language. In fact, their On-Yomi (Chinese reading) is more often used to form words in the Japanese language than their Kun-Yomi (Japanese reading).

How to write the Japanese character for “Endurance”

There are only seven strokes for the kanji 忍 (Shino-bi), and since this kanji is composed of two characters on top of each other, the top character should be written first, followed by the character at the bottom.

The other kanji for endurance, on the other hand, 耐 (Ta-eru), has nine strokes and is composed of two characters next to each other. The writing starts with the left character, which has six strokes. The right character then follows, which only has three strokes.

Try to make sure that each character in this kanji is proportionate to each other when writing to avoid making the kanji disproportionate to other kanji you will pair it with.

Remember that stroke direction when writing kanji often starts from left to right and then from top to bottom.

The kanji 忍 (Shino-bi) has several original glyph variations; the first three are from when the military, political and bureaucratic reforms were continuously happening in China. Such a time of great reforms is also called the Warring States. During which, the glyphs for the character 忍  are found in various inscriptions with varying forms.

The other original glyph for the said kanji is also found in a dictionary compiled during the Han dynasty.

There is also no alternative writing for the kanji 忍 (Shino-bi).

There is no official record as to the origin of the characters of the glyph for 耐 (Ta-eru); however, the Chinese language has several alternative writing for this kanji.

What is the Japanese concept of endurance?

The Japanese have a very high regard for endurance. Their concept of endurance came from Buddhism. It’s considered one of the virtues in Zen Buddhism.

Endurance for the Japanese could mean physically, having to bear with the world’s sufferings; mentally, keeping mental fortitude to deal with problems; and emotionally, maintaining a strong heart to resist anything that could break or sway one’s heart.

Many Japanese believes that having to endure every day is part of life. Every day, the Japanese deal with many difficulties in life despite being one of the most advanced societies in the world. The Japanese culture and society may just be the very definition of endurance.

Living in modern Japan requires a lot of endurance, dealing with long working hours, a society that forces people to conform to norms, and a culture that practices firm social distance. Most Japanese people live very strict life. And this is one of the reasons why many of them fall into the cracks of Japanese society and end up being crushed by immense social and cultural pressure.

Is the Chinese character for “Endurance” a popular tattoo?

It’s hard to say whether the characters for “Endurance” are popular tattoos. However, both the kanji (Shino-bi) and (Tai) are hardly recommended on many websites for Japanese or Chinese characters tattoo.

While it’s not recommended a lot, you can’t ignore the importance of endurance in Japanese and Chinese cultures. Both cultures value endurance a lot, especially since they both follow Buddhism’s teachings.

Should you get “Endurance” done as a tattoo in Japanese writing?

I think it would be very cool to have the kanji 忍 (Shino-bi) as a tattoo, especially if you are an anime fan or someone who practices martial arts.

It’s also worth considering kanji words relating to endurance since endurance and patience are considered to be very important values in life in general. Just make sure to research the words properly, what they really mean and how they are used in sentences. I recommend you analyze each word according to its character composition and how they are used conversationally. It makes a lot of difference to know the exact meaning of your tattoo before having it permanently inked on your skin.