So maybe you’ve been to a Japanese restaurant and wondered about the Japanese floor tables that you’ve been seated at. Sitting around a low dining table or tatami table offers a whole new perspective on the world. Japanese dining tables, Japanese tea tables and Japanese folding tables are highly sought after for the modern minimalist aesthetics, making them very appealing in contemporary minimalistic settings. We answer most of the questions people have about Japanese tables below but let’s start by introducing a few of our favorites.

If you are wanting to see what you can combine your table with in a room, check out the Japanoscope Japanese Home Decor page. For a look at what you can sit at the table take a look at our Zabuton cushion page.

If you are looking for heated Japanese tables, we have a whole post on KOTATSU HERE.

The Rolls Royce of Chabudai with beautiful wood and craftsmanship customizable to your requirements. You pay for what you get though.

An all in one table and chair set that is stylish and compact.

This low tea table is perfect for serving beverages to guests when you are entertaining. The surface is made of dark wood while the thick legs make the table extra sturdy. The top surface has a lacquar finish and measures 60 centimeters by 35 centimeter, thus providing you with enough surface to serve meals.

What are japanese floor tables called

The most common Japanese floor table is the chabudai (sometimes also called a shippukudai, shippokudai, shoppukudai in different regions of Japan).

Individual tables placed in front of a single person are called a Zen.

How high are japanese tables?

A standard size low Japanese floor table is around 30cm. This has changed over time, with antique tables being lower at anywhere between 15-30cm.

What are the pillows that japanese use to sit at their tables called?

The pillows that Japanese use to sit on at low tables are called Zabuton. They are sometimes combined with floor seats called zaiisu.

How are japanese tables set?

A Japanese table is usually set with a rice bowl to the left, a main dish plate in the centre and soup bowl at the right with chopsticks at the front. This is illustrated below.

Why are japanese tables so low?

Japanese tables are low because of the culture of Japanese sitting and sleeping on the floor. The reason Japanese people sit on the floor is a larger discussion but is related to the humid climate in Japan, which led to houses being raised off the ground. Many houses in Europe had little separation between ground and floor. In this context, people are much less likely to be inclined to take off their shoes, the floors become more dirty and people don’t use their floors for much other than walking over. In Japan’s raised floor context, the floor become a space to be used for many activities, including dining at low tables.

What are the different types of Japanese tables?

A chabudai is a popular short-legged table you will find in many Japanese homes. The table usually ranges from a height of 15 cm to 30 cm and are often designed to be collapsible for easy storage. Not being high enough for western style chairs, people typically sit on tatami or zabuton, often placed on a zaiisu chair. Chabudais can be used for different purposes, such as low workbenches, low dinning tables, study tables, Japanese tea tables.

There are several theories as to where the word “Chabudai” came from. Some say it is derived from the word Cha, meaning tea, but there also strong arguments that the word is actually derived from a chinese word meaning “to sit at a table”.

Chabudai first spread throughout Japan in the late 1800s, and their often circular design is considered symblomatic of the rise of the nuclear family unit in Japan, where families would sit around the table in a setting they didn’t highlight hierarchy.

A kotatsu basically resembles a chabudai, but the frame is covered by a heavy blanket or futon, upon which the tabletop rests. The table features a heat source installed underneath the table. In most Kotatsus, the electric heater is usually fitted on to the table itself.

Traditionally, Kotatsu have tended to be a lot more “functional” than stylish, making them perhaps not the best choice for year round use. More recently, with the heating mechanisms becoming smaller and more hidden away in the design, Kotatsu have started to become genuine competetors to the coffee table as beautiful objects in their own right. You will generally pay a little more for a Kotatsu, but given all you get for heating solution that can also be used year round, they are definitely worth considering.

Japanoscope has a whole page on Kotatsu here that goes into more detail.

The table gets its name from its ability to fold up in a single action of closing. The table is quite compact and portable, making it very useful for confined spaces. The single-action table works perfectly as a dining and tea table. The table features a nylon carrying case that makes it easy to haul around.

The meiduo is made of natural bamboo wood and features a non-standard square design. It has a multi-layered wood accent that makes its integration into different rooms seamless. It also comes with a shelf panel beneath the tabletop. The meiduo requires no setup and comes with two comfy chairs covered with cushioning.

The Yamako is also a short-legged table with collapsible legs for easy storage and transportation. It features a round wooden top and flared legs. Because of its design, the Yamako integrates into most spaces perfectly, while the natural wood adds a calming tone. The Yamako can accommodate up to four people but comfortably seats two.

How to choose the best Japanese table for your home.

The different types of tables mentioned above are designed for different spaces and uses, so what should you consider when choosing one that works for you? Well, it all boils down to what you intend to use the table for and the amount of space available in your home. Most of the tables can be used for multiple purposes, including studying, dining, or even working. If you live in a cold area, you could pick a Kotatsu for obvious reasons.

In terms of shape, there are a few things to consider:

Round tables give you the flexibility of trying to squeeze more or less people around them as necessary. They are also the most “social” and least “hierarchal” shape. If you are looking for a Japan style dining table, this shape can work well. They are good for communal eating where you put a lot of dishes in the middle to share. They also open up the possibility of using a “lazy Susan” revolving table in the middle. A square table suggests no hierarchy, so can be good fostering open dialogue. But you are limited with the amount of people that can sit, so they don’t provide flexibility. A low folding table is something you should consider if you are space restricted or want to use your home in a modular way where you bring things out when you need them and put them away when you don’t. This opens up the possibility of using your room for multiple purposes. You could, for example, use your Japanese folding table to help you change your room from a living room to a bedroom where needed. Indeed, this is norm for how traditional houses in Japan have been used over time.

Is it rude to sit cross legged in Japan?

Sitting cross legged, called “agura”, is generally considered the relaxed or casual way of sitting. In a hierarchical society like Japan it could be considered rude to sit this way if you are in the presence of someone you should be paying respect to. In this situation you would want to sit in the kneeling position, called “seiza”. This way of sitting is considered to be deferential to the others in the room. 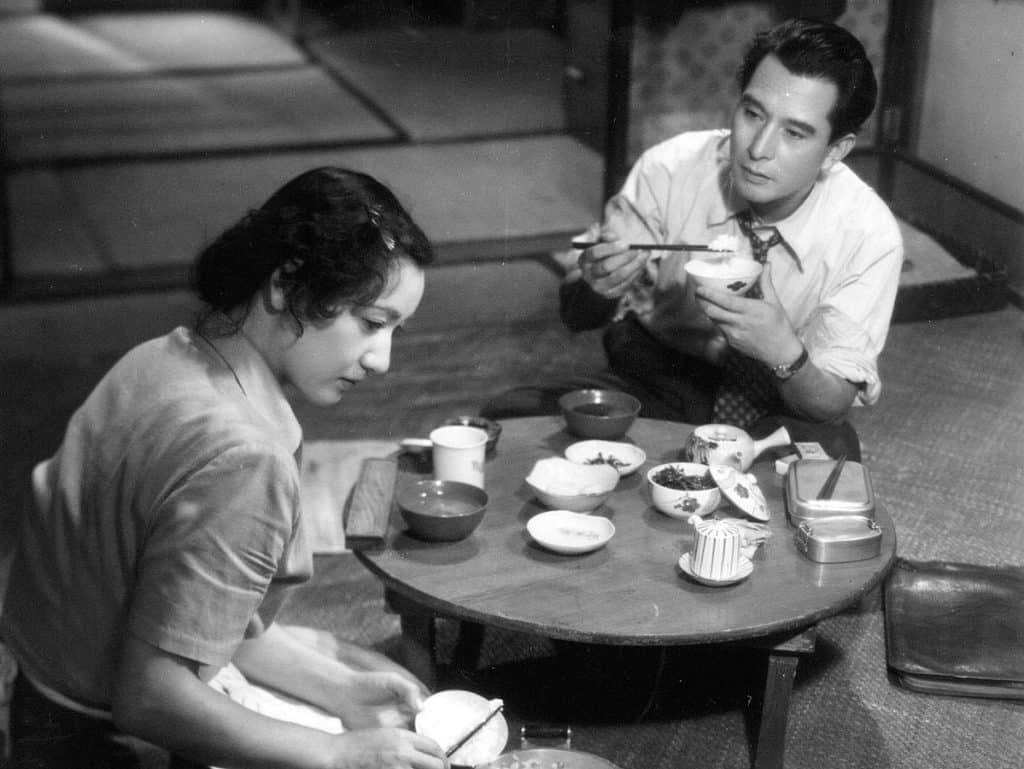 This bamboo coffee table is not only practical but also very versatile. It is large enough to serve different purposes but also small enough to be easily concealed after use. Don’t let the size fool you, though! The table can handle up to a remarkable 100 kgs.

The table is made of natural bamboo and high-quality MDF; it is finished off with a waterborne paint to make the surface smooth and more durable. The Zen table has a storage space strategically fitted under the tabletop. The table’s corners are arc-shaped to protect you and your child from being knocked down by the corners.

The snow peak table is a stylish minimalistic table made of bamboo that is made to be portable. The table is quite convenient to carry along in your next outdoor dinner or picnic. The well-built table can be used as a study table, picnic table, or even a coffee table. It can easily accommodate up to four people but is more comfortable and spacious when used by two.

This Japanese tea table is elegantly designed to complement any space it is put in.

The table is made of high-quality solid Paulownia Wood, giving it a stylish aesthetic when fit to any space. Its folding legs make it quite easy to move and convenient to keep away when it is not needed.

High end, custom made to order item from Dystopian Furnishings

If you are a lover of Japanese tables and you are looking for a something special we think the deluxe, handmade options above are worth investing in. Ultimately, each room is different and there is no one-size-fits all table.

If you live in a cold area, considering a stylish Kotatsu incorporating heating and a table that can be used year round iis a smart way to go. Check out the Japanoscope guide to Kotatsu here.