Kaze Wo Atsumete (風をあつめて）is the wonderful, whistful acoustic folk-rock song by Happy End. The lyrics were written by Takashi Matsumoto, with music by Haruomi Hosono who I’ve written about in the past, and depict someone gazing out at a city in the early morning hours. The song has the protagonist musing on the way the city appears as being “at anchor” or “moored”. The skyscrapers a wearing rustling robes. The streetcars roll out along the ocean. This is the big smoke seen through a surrealist haze.

In the wonderous dawn-time,
While I was passing through,
By the deserted breakwater,
I saw the city moored
With its crimson sail aloft

On the outskirts of town
The roads all lay down
Stretching out
All lounging around
I go for a walk, take in it all
through the stain of the haze
I saw the morning train

cross the sea and ross the waves rolling my way

Its so, wonderful,
In the daybreak hour
Passing by, paying no mind
To the deserted breakwater
And the city hoists up its crimson flag
And floats at its anchor and I just say thank you

In the no-one-around, morning
Coffee shop, where there’s noone to stop
Killing time, feeling just fine
Through the cracks in the glass I watch
As the skyscrapers rustle their robes
As the breeze soaks into the road

Kaze Wo Atsumete (風をあつめて）is the wonderful, wistful acoustic folk-rock song by Happy End. The lyrics were written by Takashi Matsumoto, with music by Haruomi Hosono who I’ve written about in the past, and depict someone gazing out at a city in the early morning hours. In this article, I take a deep dive into the song, translate its lyrics, and look at the song’s background.

Have you ever been back to a place you used to live to find it had changed so much that it had become virtually unrecognizable to you? How did you feel when you looked at the scenery and compared it to the scenery of your memories?

Well, whatever feeling you had is the feeling of Kaze Wo Atsumete, “Gather up the wind”, the defining song, of the defining band, in Japanese pop-rock lyrical history. 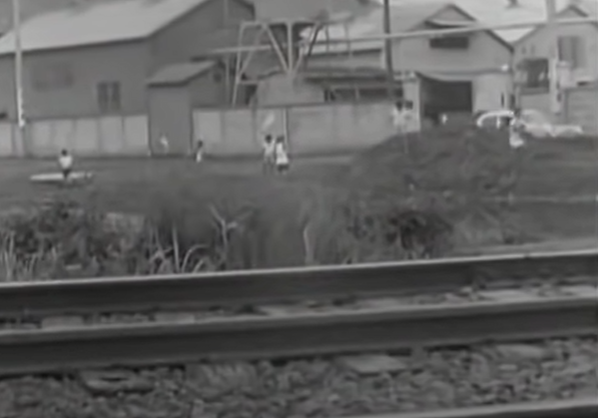 Language Style in Kaze Wo Atsumete 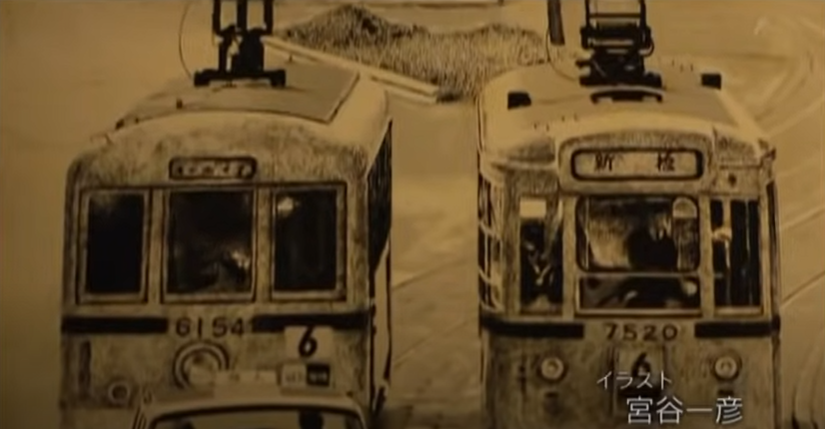 Lyrically Kaze Wo Atsumete evokes a fantastical, other-worldly cityscape, seen through a sheen of stained, but beautiful, smog. It’s a place where street cars rattle across the ocean and skyscrapers wear silken robes that rustle in the breeze. It’s a city that floats like a ship at its moorings.

The words were written by Takashi Matsumoto for the Happy End album that changed Japanese pop music forever, “kazemachi roman” or “The Romance of the City of the Wind”.

The City of Wind, in this case, is the Tokyo of the mid sixties in the years around the 1964 Tokyo Olympics. But it is also not Tokyo. It is an imaginary city existing in dream and memory. It is an echo of Tokyo, a reflection, a mirage, or to give it a more Japanese inflection, a floating world.

When asked in an interview about the meaning of “kazemachi”, he replied:

“The Olympics happened in 1964 and the house I had been living in made way for a road. The cityscape I had come to know and love suddenly disappeared.

But, you know, when you’re dreaming, or when you close your eyes, you can see the city you lived in as a child. That city of memory, I call the “Kazemachi”, the City of Wind. This city of memory can’t be seen with the naked eye, and only can be seen in my mind’s eye. I thought, “that’s just like wind”. Now I think that, more than the city that actually exists, it is the city of my memory that I need to hold most dear, I’ve felt like that ever since I was at elementary school.”

Interestingly, Japanese even has a word to describe the image of scenery in a person’s mind’s eye 心象風景 Shinsho Fukei. The four characters (called 四字熟語 ojijyukugo in Japanese）literally mean heart-image-wind-shadow. But you could translate it as the scene within one’s heart.

The concept of Shinsho fukei is most closely related to visual art, for example in the otherworldly landscapes of Kaii Higashiyama, but it is also a concept that runs through Japanese literature and poetry.

The other interesting thing linguistically is that the common Japanese word for scene or scenery “fukei” uses the character for wind.

The Concept of Wind in Kazemachi Roman and Kaze Wo Atsumete

The idea of wind features very much in Matsumoto’s work, as clearly evidenced in this song “Gathering Up The Wind” and the album title “The Romance of the City of the Wind”.

Matsumoto has described his obsession with wind in an interview saying:

And it’s not just that wind can’t be seen, it’s also that it moves. I felt like there’s something universal there. For example, wind blows across national borders. These fair winds blow without discrimination, and they are something to be reckoned with when they become violent. Within the things that can be seen, water also has similar qualities of movement, but it’s more the wind that has always captured my heart.

Also, when animals sense danger, it is often through smelling things in the breeze. What we now call information is also a part of the wind.

Takashi Matsumoto was renowned for being bookish and a bit of an intellectual. Indeed, the story goes that he started writing lyrics after fellow Happy End band member Haruomi Hosono noticed that Matsumoto often seemed to be carrying around books and said, “If you like books, then you should write the lyrics”.

The lyrics for Kaze Wo Atsumete also started from a literary poetic place. From the toilet. Well, not so much the toilet, as writing he saw on the toilet wall quoting a poem by early 20th century poet Fuyue Anzai. The poem read:

which translates roughly as “A single butterfly flew out across the Tartary Straight” and expresses the poet’s feelings of longing for his motherland, gazing out across the ocean from pre World War II Japanese-occupied China.

This goes somewhere towards explaining the somewhat “floating” quality of the lyrics.

Forerunner to Kaze Wo Atsumete

It’s also worth noting that the central phrase for the song was also used in an earlier unreleased song by Happy End, Tegami, or “Letter”. Almost all of the other lyrics were scraped except for the central phrase – which kind of proves that not all songwriting is the result of frenzied bursts of inspiration that is simply channeled down from the universe, unadulterated and unedited, and delivered to the page.

The Recording of Kaze Wo Atsumete

On the day of the recording, the composing of the song wasn’t finished. Hosono invited Matsumoto to the studio, crouched leaning against the wall with one knee up, and played him what he had. Matsumoto thought it was pretty brave of him to be finishing the song at the very moment it was scheduled to be recorded. What’s more, the other band members weren’t even on site, because Hosono hadn’t invited them.

So they went at the first take, with Hosono on acoustic guitar, channel one and Matsumoto on drums, channel 3.

It was like they were recording a demo, on the fly, with no practice. Matsumoto added bass on channel 2, and guitar on channel 6.

He doubled up his vocals on Channel 4 and 5, punching in and out phrase by phrase as necessary.

In places, he mistakenly strayed from what the original melody was intended to be. 40 years later Hosono commented that “To this day, I still can’t sing this song”.

Matsumoto called it the  “Chance” “Song Of The Century”””.

Hosono finished off the song with two channels of organ overdubs, making it a four-instruments-Hosono, one instrument Matsumoto affair. How the other band members feel about being left off perhaps the most iconic Japanese song of the 1970s is hard to say.

The Ongoing Influence of Kaze Wo Atsumete

So why is Kaze Wo Atsumete so enduring? Why does it continue to gust into the 21st century and across borders, featuring in major motion pictures like Lost In Translation?

It’s an intriguing question, especially considering the band Happy End itself had no “hits” and lasted only around three years. Kazemachi Roman only sold a modest 10,000 copies at the time it was released.

One reason the song endures is that, in Japan, the song stands as the representative high point of the movement that finally put paid to the debate about whether rock music should be sung in Japanese or English. Famously, Matsumoto was a key player in what has come to be known as the 日本語ロック論争, or the Japanese-rock language controversy (or debate). This was a discussion, played out in the media, between proponents of the “Rock must be sung in English” camp, most notably vocalised by pop-rock stalwart Yuya Uchida, and the “Rock must be adapted to Japanese” camp, reluctantly spoken for by the 20 year old Matsumoto. According to Matsumoto:

“People who said” “Japanese rock is impossible, you have to sing in English”” made up around 80 or 90 percent of the population. If you made rock music with Japanese lyrics, you would be laughed at. Prior to Happy End’s forming, there was the “Group Sounds”. People in those groups sang in Japanese, but the way they sang was basically in the style of kayokyoku.”

The majority view was held by the “Rock must be English” argument. It was Happy End, and especially Kazemachi Roman, and even more especially Kaze Wo Atsumete, that proved that the Japanese language could rock out with the best of them.

This strikes me as similar to debates I have heard around genres such as hip hop, which people sometimes argue has to be done in an American accent to sound acceptable. I’ve heard the equivalent said about Opera, this time asserting that English is fundamentally unsuited to the operatic style.

It is often said that music is the “universal language”.  Kaze Wo Atsumete proves that music and lyrics are universally compatible, if you let them be. No need for qualms, cringes or apologetic bowing of the head.

But more than this, the song breezes on because it so vividly captures a place and a mood. A specific place, in late 60’s, early 70’s, post Olympic Tokyo. Or, more accurately, a particular reverberation of that time.

It’s like the sound of the wind through the skyscrapers and the city streets.

Comparison of Kaze Wo Atsumete Japanese And English