Pimsleur Japanese Ease of Use

Do I recommend Pimsleur Japanese? Let’s cut to the chase.

So I’ll go into detail about the Pimsleur Japanese program below, but I guess first and foremost you probably just want to know if I recommend the program.

The short answer is, yes, I recommend the Pimsleur Japanese program as a good way to start learning Japanese. I now speak Japanese to a high level of fluency (I’ve passed the highest level of the Japanese Language Proficiency Test) and I found Pimsleur a helpful tool on the way to getting there.

I’ve since used the Pimsleur language program for learning some basic Chinese, and I still find it a good place to start getting some language under your belt.

Pimsleur Japanese is the first, and in many ways best, Japanese language learning approach to fully comprehend that this is the quickest way to learn a language and to fully systematize the approach in a rigorous and evidence-based way.

Paul Pimsleur, who made the course, was a serious academic with real credentials to back up his approach.

I’ll get into more detail below, but here’s a quick summary of things I do and don’t like about Pimsleur Japanese.

How Good Is Pimsleur Japanese?

The Pimsleur Japanese course is one of the most useful Japanese language learning methods I have come across, but it’s not perfect, and not cheap.

You’ll need to weigh up how serious you are about your language learning and whether you think it is worth your money to learn Japanese efficiently.

Does the Pimsleur method really work?

Yes, the Pimsleur method works for getting you to a basic level of functional level where you are able to speak and understand some sentences for asking directions, having basic conversation with friends. It can take you to a basic to intermediate level. In particular, it will really help you speak with correct pronunciation from the start.

As with any language resource, to get to a higher level, you need a range of different approaches, inputs and outputs. In particular, there really is no substitute for actually talking with real people and having real-time dialogues that are unscripted. For this, you would want to use a resource such as iTalki.com

Does Pimsleur make you fluent?

In short, no Pimsleur alone won’t make you fluent. Fluency is a major, and never-ending project. “Fluency” is a highly subjective term, but to achieve anything that resembles what most people consider fluent, you need hours and hours of speaking with real people, listening, reading, writing and getting to know a culture in a deep way.  To look at this from the opposite perspective, if you were learning English and you learned the words for “hot dog” or “hamburger”, but you had never actually eaten or seen a hot dog or hamburger, would you be able to talk about food with an American friend in a fully “fluent” way? Probably not.

Who Wouldn’t I recommend Pimsleur Japanese to?

Does the Pimsleur method fit into everyday life?

One of the things I really like about the Pimsleur Japanese is that, because it is an audio based approach, you can do it while doing other things. This is a major plus for adult learners with busy lives. You can learn while walking, riding, driving, riding public transport, washing dishes, doing monotonous tasks. The Pimsleur instructions do discourage this though and suggest you practice without interruption and with full concentration. Well, in an ideal world, that is a no-brainer. In reality though, it is really easy to give up on a language method, and indeed on learning a language altogether, if you’ve always got to do it through 100% concentration. The Pimsleur Japanese really is great for fitting in learning around the cracks of a busy lifestyle.

Why does the Pimsleur method focus on listening?

One of the reasons you learn more from listening and speaking is that this is an active process. When you hear a word you don’t know, your brain naturally tries to attach some kind of meaning to it. This means you are trying to make connections to the new information. This makes learning “stick”.

From time to time, Pimsleur Japanese will call on you to attach new meaning to words and phrases that you may only know from a different context. It makes you work a little, guess a little, associate a little. Just as you did when you learned your first language.

Is Pimsleur better than Duolingo?

So Duolingo has been becoming very popular in recent years. How does good old Pimsleur compare?

Pimsleur is much better if you want to focus on learning by listening and speaking, which, in my experience, is the most efficient way to learn a language. Duolingo does a great job of gamifying short language drills and manageable chunks.

That being said, the two systems are so different. I like using Pimsleur Japanese and Duolingo Japanese in tandem to complement each other.

Memrise also has a good Duolingo-like platform for learning Japanese. The memrise platform also has a range of user-generated content and courses, so you can really dive into a range of areas. I’ve done a comparison of Memrise vs. Duolingo for Japanese here.

This is also true of the Anki platform, which is a virtual card-based platform for learning Japanese, or just about anything else that requires memorization. Once again, there is a range of user-generated content that Anki offers.

Given that Pimsleur is very much a didactic, fixed learning platform where all the content is made by the course creators, I think it makes sense to complement it with Memrise or Anki user-created courses and content – such as courses directly linked to the Japanese Language Proficiency Test (JLPT) grades, or Japanese school system kanji year levels, etc.

How many lessons does pimsleur japanese have?

Pimsleur Japanese includes five courses, including a total of 150 lessons. Each lesson runs for 30 minutes, meaning you get a total of around 75 hours of content.

How to Get Pimsleur Cheap

If you just want to know how to shave off a few dollars from Pimsleur there are a few “hacks” you can do:

2. Buy Pimsleur Japanese on CD. This is pretty old school, but the advantage here is you buy once, keep forever. 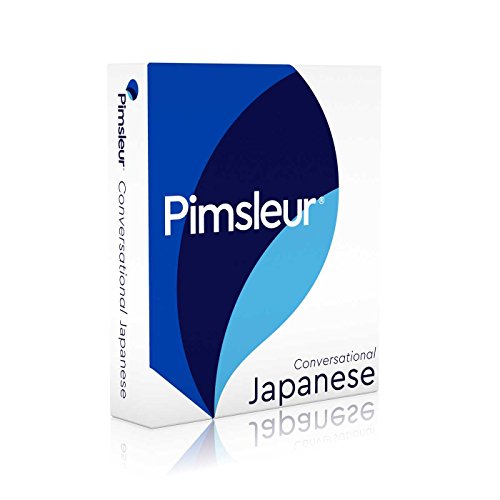 3. Use a special offer. Pimsleur is pretty aggressive at offering special offers to partners and with special sale periods. Shop around and/or wait for specials before any bulk purchases.

What Principles are Pimsleur Japanese based on?

One key principle Pimsleur incorporates is “Graduated Interval Recall”. This is just a fancy way of saying, “we make you review new material at logical intervals”. This principle, if anything, seems fairly obvious. But it’s amazing how many language learning approaches don’t actually make use of this fact. Perhaps because not all courses are put together with the rigour that you may hope for. This is a major strong point for Pimsleur.

Pimsleur Japanese is based on solid foundations and principles, but one criticism is that Pimsleur probably hasn’t moved with the times as much as they should have. Given their firm base, they seem to have rested on their laurels a bit. Where other platforms, notably Duolingo and Memrise, use adaptive learning principles based on algorithms to tailor content to each learner, Pimsleur is basically the same old Pimsleur it was 50 years ago. True, they have done quite a lot to repackage content for the digital age, there is not a lot of true innovation. They have the Pimsleur app, which gives you the audio lessons, and they have added in some review functionality and the ability to give yourself some basic quizzes, but really it all feels like a bit of an arbitrary add on. For that reason, Pimsleur is best done in conjunction with other tools – even their documentation actively discourages you from doing this.

How Does Pimsleur Japanese Work?

Pimsleur Japanese is almost wholly audio-based. It gives you 30-minute lessons where it gradually introduces words and phrases for you to listen to and repeat back using its “graduated interval recall” and “anticipation” principles. It sells these lessons either as a price for a pack of lessons or as a subscription model. There are literally hundreds of lessons to work through, so there is plenty of material to take you to a fairly good level of skill.

Who was Paul Pimsleur?

Dr. Paul Pimsleur (b. 1926, d. 1976) devoted his life to language teaching and testing and was one of the world’s leading experts in applied linguistics. He was fluent in French, good in German, and had a working knowledge of Italian, Russian, Modern Greek, and Mandarin Chinese. After obtaining his Ph.D. in French and a Masters in Psychology from Columbia University, he taught French Phonetics and Linguistics at UCLA. He later became Professor of Romance Languages and Language Education, and Director of The Listening Center (a state-wide language lab) at Ohio State University; Professor of Education and Romance Languages at the State University of New York at Albany; and a Fulbright lecturer at the University of Heidelberg. He did research on the psychology of language learning and in 1969 was Section Head of Psychology of Second Language Learning at the International Congress of Applied Linguistics.

Pimsleur Japanese is my top recommended tool for getting going with the language quickly and methodically. You can use it anywhere, because it’s audio-based.

The main drawback is that isn’t cheap. I would also suggest combining with some other more “high-tech” drilling tools, such as Memrise and Duolingo.

or our complete list of Japanese language learning platform reviews below:

I’m Peter Head. I have succesfully completed the  highest level of the Japanese Language Proficiency Test (N1). I lived in Japan for four years as a student and on working holiday.  I have toured the country six times playing music and singing songs in Japanese and English.