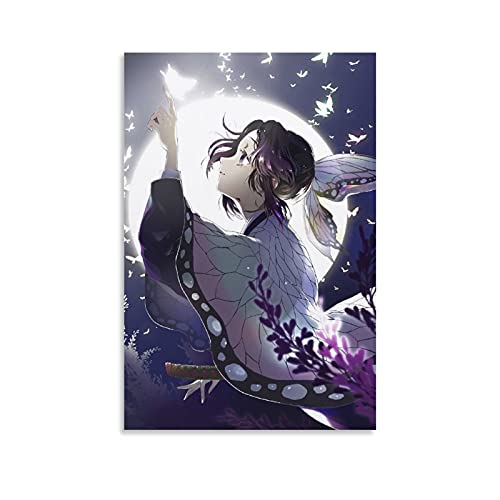 Shinobu Kocho (胡蝶 しのぶ) is a one of the most popular supporting female Demon Slayer characters in Demon Slayer: Kimetsu no Yaiba. She is also amongst the highest-ranking demon slayers pillars, or Hashira, in the show.

Shinobu is a master of the combat technique of “Insect Breathing”. For this reason, she is known as the Insect Hashira (蟲柱). 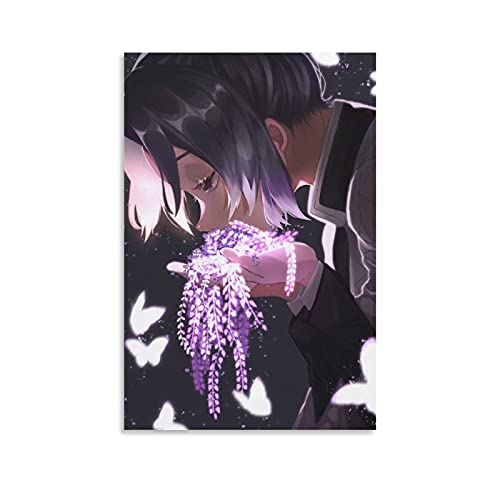 What is the meaning of their name in Japanese?

Interestingly, the name shinobu is written in the Japanese script of hiragana and does not use Kanji. This gives this part of the name a level of intentional ambiguity.

The whole name Shonobu Kocho can be interpreted as Stealthy Butterfly. 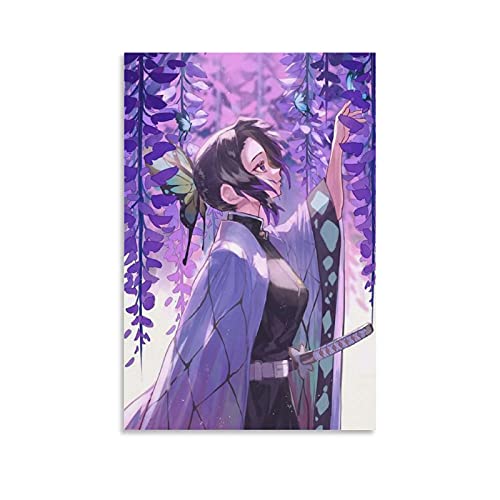 Shinobu first appeared during the Mount Natagumo story arc. She and Giyu Tomioka are the two Hashira assigned to end the Lower Rank 5 demon, Rui.

Shinobu fights against the daughter spider demon and wins with relative ease. She then finds Agatsuma Zenitsu, who can’t move, after his fight against the Son spider demon. After winning Mount Natagumo, she then leads the rescue of Tanjiro and his friends, and tends to their wounds.

Relationship with other characters 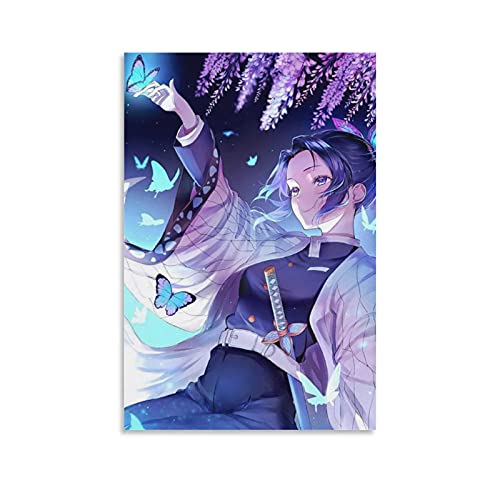 Like Shinobu, Giyu is also a Hashira and they are often assigned on missions together.

They have opposite personalities and seem to be at odds with each other. During the Mount Natagumo story arc, Giyu defends Nezuko against Shinobu. After deflecting her initial attack, Shinobu questions Giyu’s actions. Giyu then lets Tanjiro and Nezuko run away while he keeps Shinobu hindered. Shinobu continues to ask Giyu why he is defending a demon. She points out that this is against the oath as a demon slayer.

Shinobu is the only one trying to hear Tanjiro’s side of the story during the Hashira’s trial. Tanjiro tries to explain with desperation that Nezuko won’t, and will not, harm humans. Shinobu can do nothing but look at Tanjiro with a sad expression on her face.

Tanjiro and his friends proceed to recuperate in the Butterfly Mansion.

Kanao is the adopted sister of Shinobu and her older sister. She is a former Flower Hashira, Kocho Kanae. Because of Kanao’s abusive parents, she has somehow lost the will to decide for herself. Shinobu says that this will bring danger to herself and others.

During Kanae’s funeral, Shinobu comforts Kanao and shows that she understands her inability to cry. Shinobu then warms to Kanao and they develop a strong sister bond.

With Kanao’s talent and exceptional skills as a Demon Slayer, Shinobu chooses her to be a Tsuguko, or airre. Kanao begins to open up, expressing her wish to train beside Shinobu which makes Shinobu happy. Shinobu entrusts Kanao with revenge for the death of their elder sister, Kanae.

When Shinobu dies at Doma’s hand, Kanao avenges her with the help of Inosuke.

After Doma’s fall, Kanao feels Shinobu and Kanae’s presence. They give their blessings to their younger sister before departing to the afterlife. This causes Kanao to break down in tears for the first time.  Kanao then keeps her sisters’ butterfly accessories as a memento of their lives.

Shinobu is very close and loving to her biological older sister, Kanae. The sister’s bond is so deep and caring that they vowed to protect others from demons together. They don’t want anyone else to go through the same tragedy of losing parents to a Demon attack.

Kanae’s personality makes her make lighthearted, whimsical decisions without thinking first. Shinobu worries a lot about her elder sister’s behavior. But Shinobu still trusts her and supports her decisions, despite not agreeing with them.

Shinobu has a strong hatred for Doma. Shinobu’s older sister, Kanae died at his hands. When they first met, Shinobu could not recognize Doma. But as she remembers how Kanae describes her killer, Shinobu concludes that it must have been Doma. They start to exchange blows.

Shinobu’s poisons and breathing techniques aren’t strong enough to do serious damage to Doma. She is defeated and devoured by Doma. But Doma has not realized that Shinobu’s body was filled with a heavy dosage of poison. This causes Doma’s body to weaken as he fights Kanao and Inosuke. After a fierce battle, Doma is defeated. 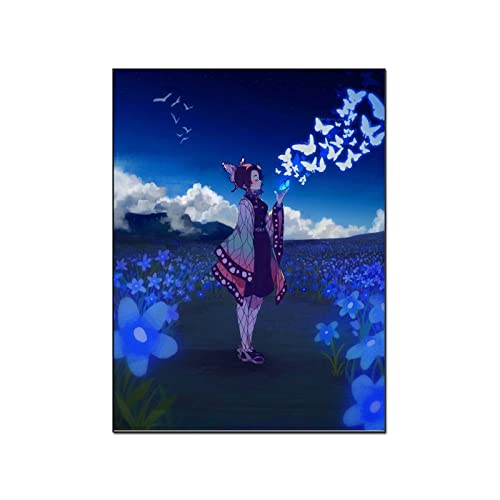 Shinobu is one of the most powerful and skilled swordswomen in the entire Demon Slayer Corps. Her fighting style is very unique, but as effective as traditional swordsmanship styles. Shinobu specializes in sword thrusting and piercing techniques to inject poison into targets. Her sword thrusts are so fast and powerful that they can pierce boulders. This puts the Drop Ripple Thrust, the fastest thrust form of the water breathing second to it. But the structure of her sword makes it ineffective for blocking attacks. So she makes up for it with her swift thrusts, dodges, and stabs.

A Breathing Style created by Shinobu Kocho. She designed it to compensate for her lack of physical strength to cut off a demon’s head. She even goes toe-to-toe with the second strongest Upper Rank demon, Doma.

An aerial attack that delivers poisonous stabs while charging at the target.

Allows the user to dash to their target with incredible speed to strengthen a single poisonous stab.

A six-stab attack that aims to inject poison into the demon’s weak spots. Each stab has a large dose of poison that will kill a demon.

The user runs at full speed in a zigzag motion to create an opening for a demon and stab its neck. The momentum of the attack enhances the strength of the stab with its poison that can kill demons.

Shinobu’s Katana is a unique Nichirin created by Tecchin Tecchikawahara. From the handle to the hilt of the sword are like any other katana. But the blade of the katana isn’t present and the back side of the blade becomes somewhat like a rod. At the tip of the katana is a sharp, needle-like form that resembles an insect’s stinger. This unique Nichirin is also capable of injecting wisteria poison that kills demons. The hilt of the katana resembles a four-petal flower with an aqua color, trimmed with orange. The above hilt part of the katana has the word Evil Demon (right side) and Destruction (left side) engraved in them. These engravings are in Japanese Kanji. 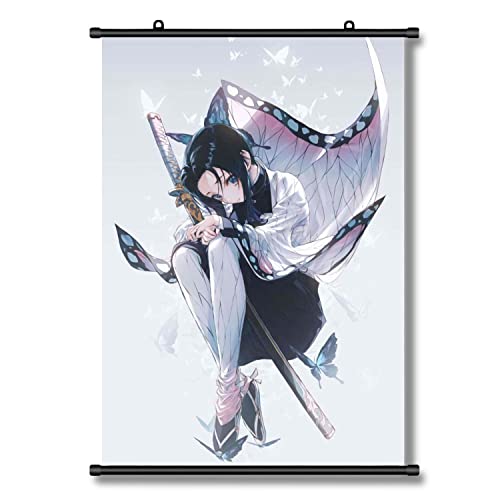 One of Shinobu’s notable scenes was her first time showcasing her skills in the Mount Natagumo story arc. She is an agile hashira that leaps from tree to tree with ease, but delivers a series of fatal poison stabs. She and Tomioka lead a reinforcement to attack Mount Natagumo following a group led by Tanjiro. Here, Shinobu defeats the daughter spider demon without breaking a sweat! After winning Mount Natagumo, she sets about treating the injured demon slayers and nursing them back to health.

Another notable scene is when Tanjiro, Zenitsu, and Inosuke recuperate in Shinobu’s Butterfly mansion. She encourages Zenitsu, giving him the most cheer of the three. Zenitsu has a notable weakness towards the kindness of women. So Shinobu’s kindness lights are fire within him for his rehabilitation training – even as she tells him that it’s okay if he isn’t ready to start moving.

Of course, Inosuke has the habit of wanting to be the best at all times, in any aspect, against anyone. So hearing Shinobu saying it’s okay if he can’t do so, comes as a provocation to him. Inosuke even, rather worryingly, threatens to rip Shinobu’s breasts! 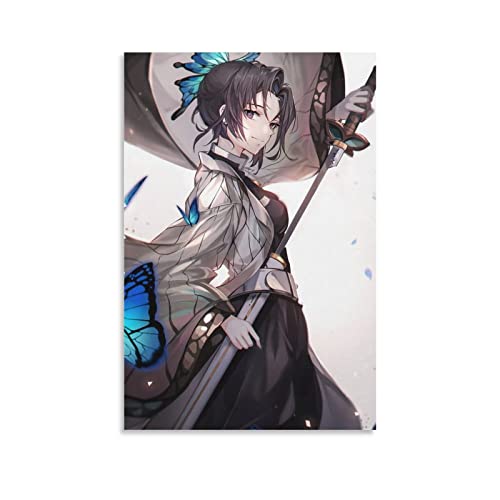 “Among the Hashira, I am the only swordswomen that can’t cut off a demon’s head. But I am a great person who can make poisons that can kill demons.”

“Oh, right. You weren’t aware that you were hated. Sorry for saying something unnecessary”

“It sounds like a difficult mission. But if Rengoku-san is present, no need to worry then.”

“So you’re serious, Tomioka-san. To think that a Hashira would protect a demon.”

Shinobu is a bright, friendly, and cheerful demon slayer. She always wears a smile on her face no matter the situation she is in.

She also enjoys teasing people – to the point of sometimes not knowing where the boundaries are.

She enjoys picking the most on Giyu Tomioka. Though she claims to want to get along with demons, she can be rather cruel towards them.

During the Mount Natagumo Arc, she “plays’ ‘ with the spider demon daughter, all the way to the spider’s death!

Initially, Shinobu hates Nezuko, because she is a “demon like any other and deserves to die”. But after hearing their story, she develops compassion toward the Kamado siblings.

At other times, Shinobu’s calm and smiling face hides her inner self. Shinobu holds a deep hatred towards demons!

This hatred is because her older sister and a former Flower Hashira, Kocho Kanae died at the hands of a demon.

Tanjiro senses all of this. Tanjiro sees through Shinobu’s cheerful facade. He sees her deep anger.

When Kanae dies, with her last breath she wishes for Shinobu to quit the Demon Slayer corps and live a normal life. But Shinobu devotes her life to her revenge upon the demon who has killed her sister.

Shinobu reveals this hateful side of her during her fight against Doma. She remembers her sister’s description of the demon that has attacked her. Doma later confirms that he was the one who killed Kanae. 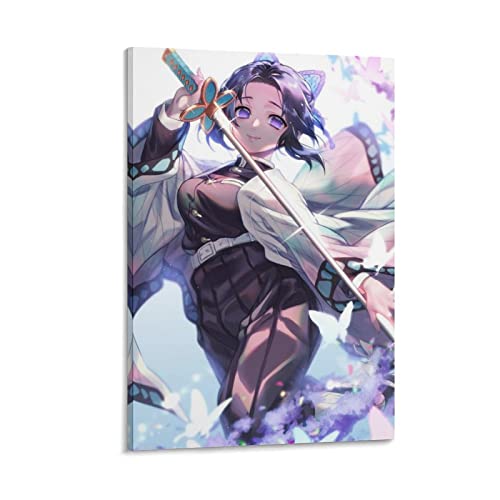 She matches this with her tabi socks and hakama pants.

Above this is a white butterfly patterned Kyahan fading into pale blue and pink, around her lower legs, fastened with white ribbons from the back.

She also wears a white haori that was once owned by her older sister. This has a butterfly pattern like her kyahan and its color scheme. At the bottom of the sleeve is a black and white dotted trim.

On her feet she wears Zori sandals with purple straps  and a hidden blade in one of the heels.

When Shinobu was fourteen, she had a different Demon Slayer uniform. This consisted of silver buttons and cloth with a darker shade of purple. This was topped with a plain white haori.

What does Shinobu’s clothing tell us about who she is?

Despite Shinobu having a deep hatred for demons, she wears a cheerful, smiling, and calm face. She has quite a literal resemblance to a butterfly which gives a sense of calmness and beauty. Even demons can’t tell when the lethal strike is coming. They are lulled by her beauty and personality.