We spend approximately one third of our lives sleeping. Why not do it in style? Who says you have to look a grandparent when you get into bed?

Japan has a lot of luxurious and exotic options for things things to wear between the sheets. A few options include silky kimono robes, more practical & understated Jinbei (which we’ve done a whole post about here) or a Yukata summer kimono, which would look equally at home at a festival in Japan. Let’s have a look at what’s out there.

What is a Kimono?

First thing’s first, what does this word “Kimono”, which we all use, mean?Literally, “Kimono” really just means “clothing”. The two characters that make up the word are:

着 “Ki” which means to wear

So any “thing” you “wear” is a kimono. As Western culture was imported into Japan in the late 19th century, there began to be a distinction between kimono and “western” clothing, referred to as Yofuku 洋服

Today Kimono is used in Japan to refer to any clothing that is traditional. So within “Kimono” you have a range of styles. Let’s look at a few which can be used as Japanese pyjamas. 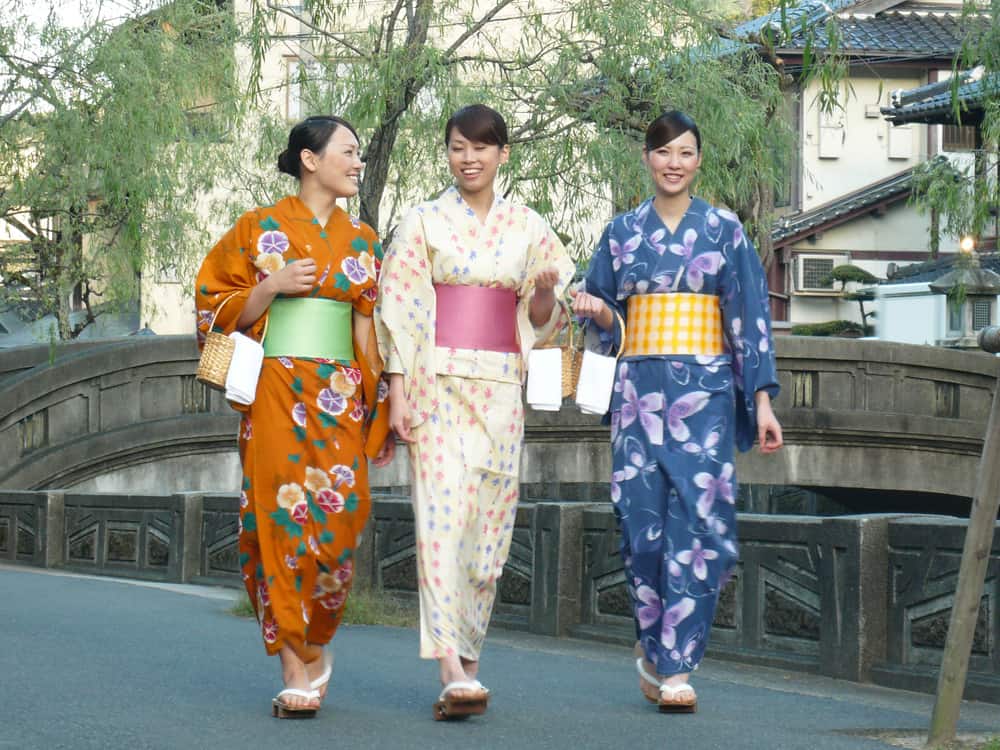 Yukata ー The simplest form of Kimono. The Yukata is a robe that was traditionally worn before and after bathing. Over time, it has become a Kimono that is often worn at festivals in the summer months. Other kimono have a reputation for being difficult to put on correctly without practice. The Yukata, by contrast, is Kimono for the masses. They are also traditionally worn without any long undergarments.

They are traditionally made of cotton or sythetic materials. Jinbei – are a bit closer to Western style clothing than a full blown robe-style Yukata. So they are a little bit less of an overt “statement”. They are also easier to slip on and off because you don’t have to worry about tying up your obi belt. A lesser known are a subset of Kimono, they are light cotton or hemp material top and bottom pairs that are made to be airy by including hatched gaps along the stitching.

There is a long history of women wearing Kimonos as Japanese night-ware stretching back to the Japonism movement in Europe. These long flowing robes, often made of silk or satern, have come to represent luxuriousness and exoticism. Today you see a lot of variations including shorter garments somewhere between a Haori (jacket or overcoat) and a full length Kimono.

Are Kimono worn by both men and women?

Since Kimono simply means clothing, yes, men and women did and do wear Kimono. There are plenty of sleepwear & Japanese pajama options for men & women.

Materials for Jinbei and yukata are roughly divided into cotton and hemp (linen), either of which may be 100% or mixed. The more cotton you have, the better it feels and the easier it is to clean.  Hemp tends to wrinkle more than cotton, but will give you a breezier feel.

Some garments also use Japanese paper, “washi”, as a mixing material – especially in some of the more high end examples.

The more luxurious robes use materials such as silk or satin.

If you are after a high end luxury item this one from Kiki De Montparnasse is hard to beat.

Stand Out Japanese Pjs from other online stores