The most common Japanese word for “destroy” is a combination of two kanji Chinese characters 破 (ha) and 壊 (kai) to form 破壊 hakai. Note that, by themselves, they are closer to the word “destruction” than to the verb “destroy”. To make 破壊 hakai into a verb, you need to place hiragana characters after it する (suru) as 破壊する (hakai suru).

Another character that means “Destroy” is 滅, which has become quite well known around the world due to its use in the Japanese title for the smash hit manga/anime 鬼滅の刃Kimestsu no yaiba (which literally translates as “Demon-destroying blade” or “Demon Slayer”). 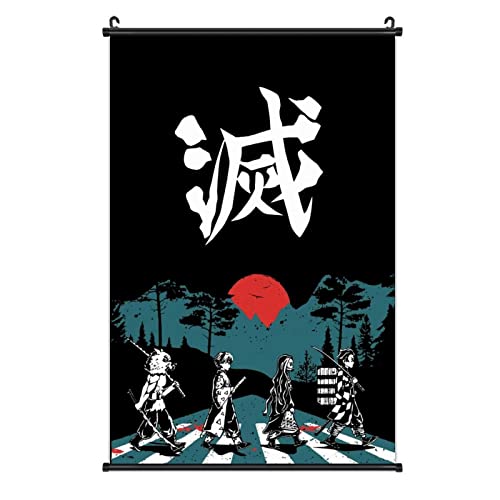 The character “metsu” as used in Demon slayer

Why is the Japanese symbol for destroy popular?

Japanese culture is full of symbols and kanji that are both intricate and mysterious. One popular symbol in Japanese is the kanji for “destroy.” Why is this symbol so fascinating to many people? It could be related to the cult of martial arts, or to its military connotations, or its more esoteric meanings.

The most common single Japanese symbol for “destroy” is the kanji 破, and it’s often used in manga and anime to depict violence or destruction.

Whatever the true meaning of the kanji, it is clear that people around the world are fascinated by it.

What does the concept of “destroy” or “destruction” mean in Japan?

The idea of destruction is pervasive in Japan. From the bombings of Hiroshima and Nagasaki, to the Fukushima Daiichi nuclear disaster, Japan has a long history of reckoning with destruction.

The country has been through many difficult times in the past. One of the most difficult periods was during World War II. During this time, Japan was invaded by the Allied forces, and in response, the Japanese government decided to start a campaign of destruction called “the war of annihilation”.

Since World War II, Japan has been haunted by the idea of destruction. The country experienced massive destruction during the war–from bombings to fires to army attacks–and many Japanese people still vividly remember those days. As a result, they are often very cautious and fearful of sudden or unforeseen events.

How is the word “Destroy” in Japanese pronounced?

The Japanese symbols or kanji for the word destruction 破壊 are pronounced as Hakai (はかい). There are several other pronunciations of the two characters contained with this word, which will look at below.

As mentioned above, you can change the word into a verb “destroy” by adding する (suru) after the word as 破壊する (hakai suru)

There are a lot of ways “destroy” can be expressed in the Japanese language. Some are given below.

By placing the hiragana る after the two symbols that make up destroy hakai 破壊, you can can create two different verbs that are related to destruction.

Yaburu is a verb form in the Japanese language which means to rend, rip, tear, break, defeat, frustrate and to destroy.

I tore the string.

I ended up breaking my promise to my friend.

Kowasu is also a verb form means to destroy, break and to demolish. Compared to Yaburu, Kowasu has more emphasis on the word Destroy. Sometimes you hear bukkowasu(ぶっ壊す) specially in japanese animated series which also means kowasu but has more emphasis. bukkowasu is a more animated way of saying “destroy” in a conversational style.

She broke the window on purpose.

Kuzusu also means to destroy, to demolish, to pull down, to tear down, to level. The kanji alone means crumble, demolish or even die.

Drink lay waste to his body.

To those who watch anime or animated japanese series like Dragon Ball super, Hakai is familiar as the word for “destroy” most commonly used in this genre.

The devil destroyed Hiroshima and Nagasaki.

The typhoon left behind a trail of destruction.

This character  “Destroy” has become quite well known around the world due to its use in the Japanese title for the smash hit manga/anime 鬼滅の刃Kimestsu no yaiba (which literally translates as “Demon-destroying blade” or “Demon Slayer”.

It is used in the following words:

to destroy; to overthrow; to wreck; to ruin

Words that include the kanji for “Destroy”

Kare no hasan wo hikiokoshita no wa kakegoto no tame deshita.

Was it gambling that brought about his bankruptcy?

The gradual ruin of our country has to be stopped.

Collapse, crumbling, breaking down, caving in.

This incident led the movement to collapse.

To tear down, to shatter.

He broke up the chair for firewood.

How is “Destroy” expressed in Chinese?

破坏(Pòhuài) is how Chinese expresses destroy in their language. The first symbol resembles that of japanese symbol which means to rend, rip, tear, break, defeat, frustrate and to destroy. The second symbol means bad, evil, wicked, spoiled. The only difference between Chinese and Japanese for destroy is their second symbol to complete the word in their language, but doesnt seem to have that much of a difference in meaning.

Stroke order for writing the characters in Japanese “Destroy” and associated symbols.

Historical forms of the chinese character for “Destroy”

Here are some of the historical forebears for the character 滅 metsu.

So should you get “Destroy” done as a tattoo in Japanese lettering?

Like any other Japanese symbols and characters, the word “Destroy” can be expressed in many ways – which you need to be aware of if you’re thinking of getting one as a tattoo.

The most common Japanese symbol Hakai (破壊) would be the most obvious choice because it is the most well-known symbol of all the symbols discussed above. That being said, the word without the ending する (suru) placed after it is actually closer to the word “destruction” in English, so you want to think about whether you are wanting to use a doing word or a noun.

Another option, especially for fans of Demon Slayer Kimetsu no yaiba 鬼滅の刃 is to get the character 滅. This one is rarely seen as a single character by itself, but can be interesting for that reason. It is likely to make many people immediately think of Demon Slayer, as the character is displayed prominently on their uniform backs.

In conclusion, getting a tattoo in Japanese lettering can be a beautiful way to show your love for the language and culture. However, it is important to do your research before getting inked, as not all translations are correct. Be sure to find a reputable artist who can help you create a design that is both accurate and beautiful.

You may also be interested in the Japanese symbols for darkness or the symbol for samurai.