Trust is one of the fundamental building blocks of any relationship. Whether it’s the trust between a parent and child, husband and wife, or friends, trust is what allows us to feel safe and secure with someone.

It is built slowly over time through repeated interactions and mutual understanding. It is based on a foundation of honesty, respect, and cooperation. Trustworthy people are highly valued in Japanese society.

It is because of trust that Japan is one of the safest countries on earth. You can leave your belongings anywhere and trust that they will be there by the time you return. If you lost something in Japan, you can trust that you will get it back one way or another.

Japanese culture and society are founded on extreme trust in each other to the point that you can leave your store open without anyone looking after it and still people will pay for everything that they take. However, there is more to Japanese “trust” than just being able to do what is legally correct.

It is important to understand what “trust” really means in the Japanese language and culture.

What is the Japanese symbol for trust? 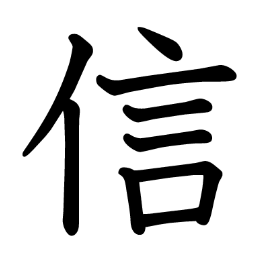 The Japanese kanji (Chinese writing) for the concept of “trust” that we use in the English language is 信. It has an On-Yomi (Chinese reading) /shin/ (シン). It has a dictionary meaning faith, truth, fidelity, and trust.

The kanji for trust is composed of two simple kanjis put together in one: first is the kanji 人(亻) which means a person. The other kanji is 言 which means word. Together, the concept of trust is about having to believe in a person’s word.

The kanji for trust is the embodiment of the adage “A man is only as good as his words”.

What words are the Japanese characters for trust used in?

Some common Japanese words that use the Japanese characters for trust relating to their meaning in English are:

信頼, pronounced as / shin.rai/, is used as a noun and a verb (irregular/Suru). It has a dictionary meaning reliance, trust, and confidence. It is a general term for trust and is often used in daily conversations and various types of contexts.

In some contexts, 信頼 (Shinrai) could also be used to describe someone who has a very stable status –one that cannot be easily removed from power or strip of authority.

He abused our trust.

He is not a man to rely on.

I believe in you.

The lesson which we learned was never to trust anyone.

The Japanese fiscal authorities are weighing measures to restore public confidence in their economic management.

信任 (Shinnin) is also a common Japanese word used in everyday conversation and it primarily means having to leave the management to another person. It is often used in a context where the concept of processes is involved such as in the office, workplaces, and task management.

The second kanji 任 (On-Yomi: Nin) has a dictionary meaning responsibility, duty, term, entrust to, and appoint. Basically, the term 信任 (Shinnin) is an act of trusting someone to do their responsibility or at least what they are expected to do.

This kind of trust focuses more on the task given to the other person rather than having faith in them. It is the same kind of trust you give to your workmates despite not having a strong relationship with them. You basically believe that they will do what they are paid to do by the management.

Confidence is gained in the system.

It was about my confidence in myself.

Confidence is lost in the trader self.

We appeal to all sides to create an atmosphere of confidence and trust.

Tsunashige had a strong trust from Ujiyasu; it is said he was given the plenary power of diplomacy and military as a representative of Ujiyasu.

Saying that you want to lend a person an amount of money on the condition that they will pay within a period mainly because they have a good background when it comes to money is a form of 信用 (Shinyou).

Another example would be when you trust someone to win because he has a high win rate is also 信用 (Shinyou). The same way that you don’t trust a random person because you don’t know them.

I am on good terms with him. He always keeps his promises and is relied upon by everybody.

I have lost faith in the doctor.

Tom thinks he can trust Mary not to do something stupid.

The man, in short, is not to be trusted.

She’s honest enough, but can you really trust her?

Is the Japanese symbol for “trust” the same in Chinese?

How to write the Japanese character for “Respect”

Remember that stroke direction when writing kanji mostly starts from left to right and then from top to bottom.

What is the Japanese concept of trust?

There are different values relating to trust in Japanese society. Right now, Japan is one of the leading counties with a significantly high interpersonal trust rating among its citizens. This is quite obvious in their culture and their way of living.

The way the Japanese perceive trust is somewhat different from the rest of the world. In Japan, you don’t need to have a strong faith in everyone you encounter just to have trust in them. This is manifested well in their use of language.

The Japanese language has different words for trust as exhibited in this article. They have words for trust relating to devotion, admiration, responsibilities, religion, economics, and so on. Each word has its nuances that make them different from one another.

For example, you don’t need to have full knowledge of another person’s background in Japan to trust them to do stuff for you. The concept of social responsibility in Japanese society despite the disparity in the social distance creates different levels of trust among the members of the society.

Is the Chinese character for “trust” a popular tattoo?

It’s hard to say whether it is a popular tattoo or not since no statistics or research indicates which tattoo is popular to most people.

However, if you look at several websites that offer Japanese and Chinese kanji printed on shirts and home decor, you will notice that the kanji for “Trust” often comes up in their selections. Thus, it is safe to say that the kanji for “trust” might be one of the popular Kanjis, especially in our current society where people you can trust have become harder to come by.

Should you get “trust” done as a tattoo in Japanese writing?

The Japanese kanji for “trust” is worth considering especially if you value trust very well. You can even choose what type of trust you want to represent in your tattoo based on the level of trust used in the Japanese language.

You can choose the single kanji for “trust” to represent a general type of trust that we give to everyone we encounter. On the other hand, you can choose the kind of trust relating to the topics you are interested in such as relationships, businesses, employment, etc.

Just remember to do your research properly since all these words for “trust” in the Japanese language have slight nuances which make a huge difference when put into context.